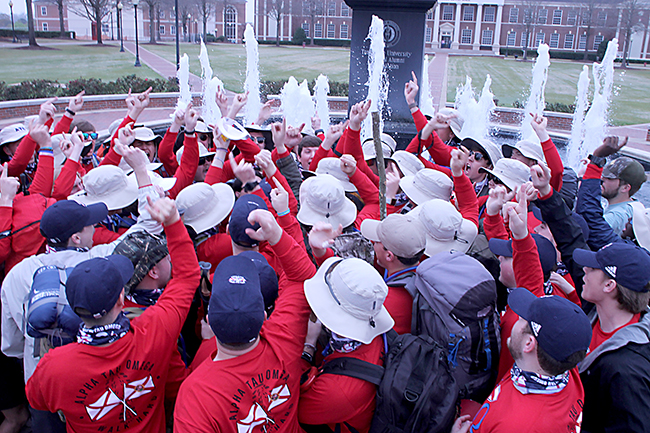 Thirty-six brothers from Alpha Tau Omega fraternity set off on a 128.3-mile journey on a cold, damp Friday morning.

The fraternity members are headed to Pier Park in Panama City Beach, Fla., as part of Alpha Tau Omega’s 13th annual Walk Hard Fundraiser for charity. Each spring break, the hikers and support staff give up their spring break to raise money for charity. Since, 2015, the fraternity has raised money for Jeep Sullivan’s Wounded Warriors Outdoor Adventures.

This year’s Walk Hard will continue to support Sullivan’s non-profit, but the journey to Panama City will be under different circumstances.

“It’s a different challenge every year,” 2022 Walk Hard Director Matthew Taylor said. “Some years its foot issues, some years its bugs. Each year is different. The only thing we can learn from the year before is to expect the unexpected. This year, it’s definitely going to be a cold week. We’ve got the walkers supplied with raingear and cold weather clothing. We’re telling them to just put one foot in front of the other and take it one step at a time.”

The itinerary calls for the hikers to walk 28 miles on Friday, staying the night in Enterprise. Then chalk up 24 miles on Saturday to Hartford, 23 miles on Sunday to Bonifay, Fla., 19 on Monday to Vernon, Fla., another 18 on Tuesday to Ebro and the final 17 miles to Panama City Beach on Wednesday.

Taylor said the fraternity raised $90,000 on last year’s Walk Hard and this year’s goal is $100,000. He said that would put the fraternity in the neighborhood of raising a half million dollars for Jeep Sullivan’s Wounded Warrior’s Outdoor Adventures.

Sullivan was in Troy Friday morning to thank the fraternity and wish them well on their journey to Panama City Beach.

“One of the best things about this is that we get to see these college boys become young men when they leave to walk to Panama City Beach,” Sullivan said. “When they complete this, nobody can tell them they can’t do anything. We get to be a part of that. The ATO brothers are a lot like the military brothers and sisters. They accomplish things together.”