POPulus performs at The Studio 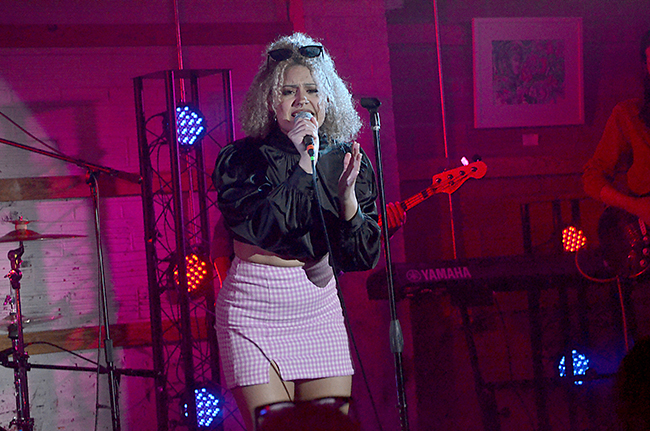 The University of Texas has the Hole in the Wall and Yale has Toad’s Place but Troy University has The Studio.

On Thursday night, Troy University’s POPulus music ensemble performed at The Studio in downtown Troy to an audience that included 93-year-old Virginia Bush and five-year-old William Drinkard. To them, and everyone in between, it was a fun-filled night of “terrific music from large group of talented singers and musicians

“I loved it; I just loved every minute of it,” Bush said. “It was wonderful. Everybody had a great time

Allene Snider, laughingly, said “even at my age, those talented young people appealed to me.”

“There was a tremendous amount of talent in that one space,” Snider said. “I thank the Johnson Center for bringing POPulus downtown and anytime I hear POPulus is going to be at The Studio, I’ll be there.”

POPulus is Troy University’s popular music ensemble comprised of students in the Music Industry Program. Artists of diverse and eclectic styles blend together in a concert production and in a unique musical environment honoring all genres of American popular music.

“POPulus played to a very age diverse audience,” said Brenda Campbell, director of the Johnson Center for the Arts, event host. “The audience included university students, community members and family members of POPulus, some had driven long distances to be there. It was obvious by the response of the audience that they very much appreciated the talents of all members of the ensemble.”

POPulus is a music industry group that includes those who work behind the scene.

“They do a tremendous job of getting the lights and sound ready for the concert,” Campbell said. “They are a very important part of the concert. One of them remarked that he is excited that what he is doing now is what he will be doing for the rest of his life.” It is wonderful to know that, what they are doing now, is helping them find their places in life.”

Campbell said the POPulus concert joins other university productions at The Studio that strengthen the town and gown relationship between the downtown arts center and Troy University.

“Events like tonight, bring artists from the university to downtown Troy and also provides opportunities for members of the community to attend events here in town,” Campbell said. “That relationship is of benefit to both the arts center and the university.”

Campbell said the Johnson Center for the Arts is an art gallery and much more.

“It’s a true arts center,” she said. “The JCA supports the visual arts with its Art by the Tracks program, and Center Stagers, which is creative drama program for young people and art enrichment by Common Ground.