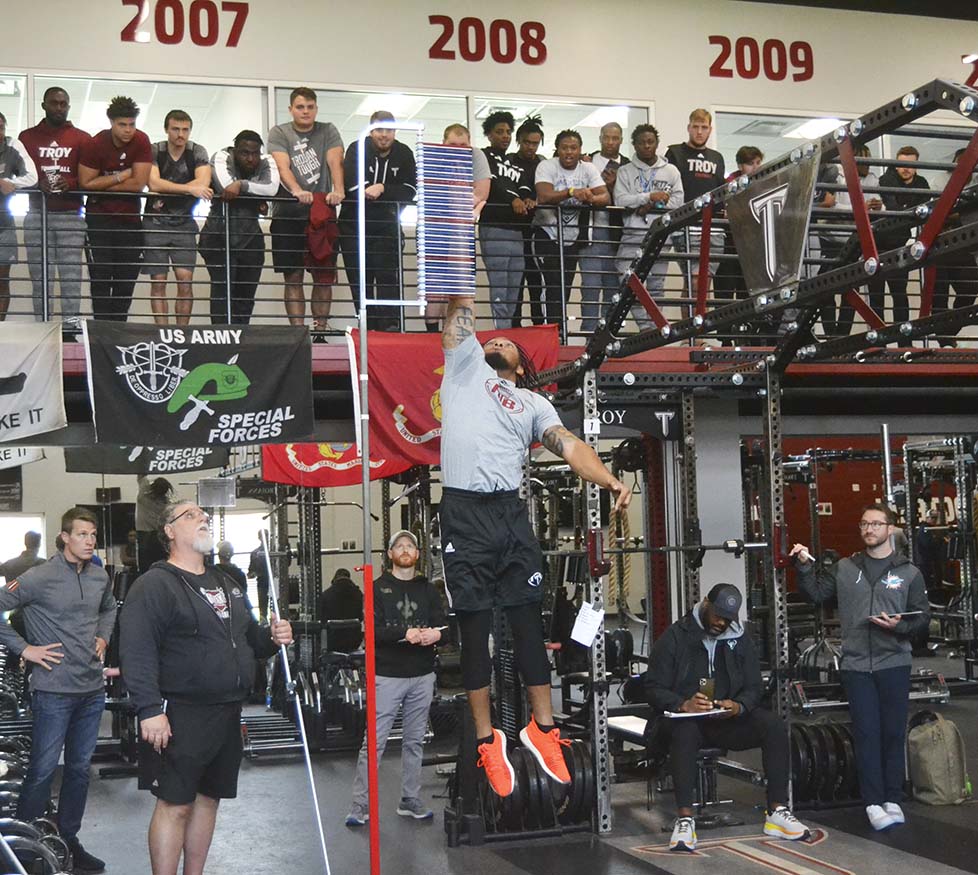 A number of NFL scouts descended on Troy University on Thursday morning as draft eligible Troy Trojans worked out in hopes of continuing their playing careers.

Among the Troy players that worked out were receiver Reggie Todd, long snapper Cameron Kaye, running back BJ Smith, defensive lineman Cherokee Glasgow and linebacker Jordan Anthony. Former Trojans Tray Eafford, who played at Troy from 2016 through 2020, and Lucky Oyovwi, who played at Troy from 2016 until 2018, also worked out in front of scouts at Troy’s Pro Day along with Alabama State long snapper Luke Barnes and receiver Tevin Sharpe.

One of the standouts of the day was sixth-year senior Smith, who impressed scouts and seemed to leave no doubt that he was fully healthy after a pair of devastating injuries during his Troy career. Smith not only ran a 4.56 40-yard dash but he performed 20 reps on the bench press – the most of any player there – and wowed those in attendance with a 35-inch vertical leap, which would have been good enough for seventh best out of all players at this year’s NFL Combine.

“It’s good, I hope I showed that today,” Smith said of his knee. “I hope no one has any questions about whether I’m the same or not. I felt good and I think my vertical showed that.”

Smith came into the 2019 season as the preseason Sun Belt Offensive Player of the Year before tearing his ACL in the second game of the season. He then suffered a hip injury in car accident that required surgery just before the 2020 season. Despite all of that, Smith returned to play in 2021 and ended his Troy career with 2,203 rushing yards and 23 touchdowns along with 532 yards receiving.

Troy head coach Jon Sumrall, who was one of the coaches that recruited Smith to Troy, said that Smith’s dedication and leadership has been inspirational to all of his teammates.

“BJ is an incredible young man,” Sumrall said. “I had the privilege of knowing BJ when we recruited him here. He’s a phenomenal young man and has overcome a great deal of adversity and fought through injuries and has really set a tremendous example for our team.”

Despite the injuries, Smith said he never doubted that he would return to form.

“I believe in God and I knew if I put Him first, I can do all things,” Smith emphasized. “So, I’m not surprised. I just had to put in the work and continue to believe in God that He would get me back to where I was and I felt like I showed that today.”

Another sixth-year senior is long snapper Cameron Kaye, who has started for Troy for five seasons. While long snapper isn’t a position that most fans think of when thinking about NFL prospects, it’s a position that is important to NFL scouts and Kaye has shown to be one of the best in the country during his college career.

“I think I prepared well,” Kaye said. “A lot of preparation went into this and I think that was big. It’s a big transition coming from college, where a lot of schools have snappers release down field and not block, so just working on that transition and working with the coaches and getting that down has been (important).”

When players were doing their bench press sets and when players ran their 40-yard dashes, the entire rest of the Troy football team could be seen and heard cheering them on. 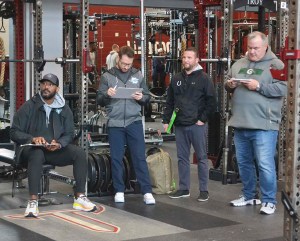 “You want them to at least have a glimpse of what (Pro Day) looks like, so that they are a little more prepared when they hopefully walk into that situation and it’s also great for them to cheer on their teammates,” Sumrall said. “I think the best part of the day is maybe in the weight room when the guys are on the bench press and all our players are on the balcony yelling and cheering for them to get one more rep in.

“That was a lot of fun and exciting. One of the scouts said that this is one of the best Pro Day environments – in terms of your current players being there and cheering the others on – that (he’s) seen in awhile, which was cool.”

While the NFL is the ultimate goal for all of the players working out at Pro Day, they’re also cognizant of the upcoming USFL and XFL leagues, as well.

“I’m definitely interested and think those are an option,” Troy linebacker Jordan Anthony said. “Whether it’s the CFL or XFL or USFL or whatever else, I love the game. So, just being able to play anywhere I’ll be grateful for.”

Smith agreed with his teammate’s assessment, saying it’s not about money or fame for him.

“When you love the game you’ll pretty much play wherever,” Smith said with a smile. “Money and exposure isn’t even really a factor, it’s just about doing what you love to do.

“When you’ve been doing this since you were five years old and here you are at 24 and still have a chance to do it, that’s always a positive. The highest level is always the goal but if you can keep doing what you love to do then why not?”

Following the football season, Kaye competed at both the Hula Bowl and NFLPA Bowl and said that he met and spoke with USFL coaches there.

“Those new leagues are great, especially for specialists,” Kaye said. “There is a limited amount of jobs open for us.

“There are 32 teams and 32 long snappers. Those new leagues are great and for us trying to break into the (NFL), it’s really great.”

The NFL Draft takes place April 28 through April 30. The USFL begins its inaugural season on April 16, while the XFL will begin in the spring of 2023. The Canadian Football League will hold its own draft on May 3 and begin playing the 2022 season in June.