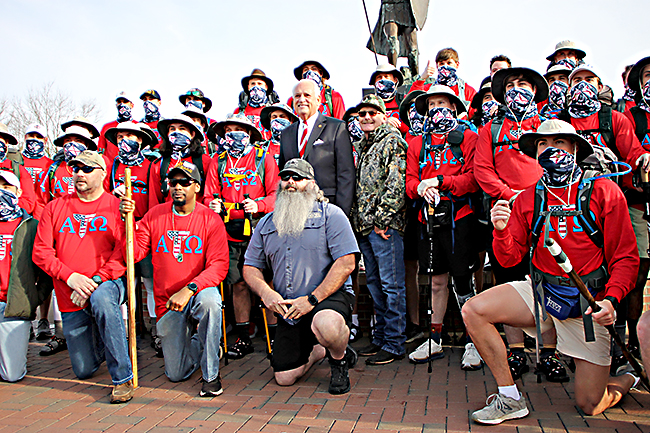 The brothers from Alpha Tau Omega will take the first steps on a 128-mile journey to raise $100,000 for Jeep Sullivan’s Wounded Warrior Outdoor Adventures.

The fraternity’s hikers, support staff, friends, family and supporters will gather around 7:30 a.m. at Troy University’s John Robert Lewis quad. There will be a brief ceremony before frater-nity brothers embark on their journey to Panama City around 8 a.m.

This will mark the 13th year the ATO brothers have walked the 128.3-mile trail from the quad to Pier Park at Panama City Beach, Florida. To date, the fraternity has raise close to $500,000 for charity. Last year, ATO raised a record $90,000. Matthew Taylor, director of the 2022 Walk Hard campaign, said the fraternity had set a fundraising mark of $100,000 this year.

“What you’re doing at Walk Hard is going to change your life,” said Jeep Sullivan, the director of the non-profit, to walkers in 2021 during last year’s campaign. “Nobody will ever be able to tell you that you can’t do something from now on.”

ATO brothers will depart from Troy’s quad at 8 a.m. on Friday and are scheduled to arrive at Panama City’s Welcome Center on March 16 around 2 p.m. The fraternity brothers will take the last steps of the journey onto the Panama City Beach pier around 4 p.m.