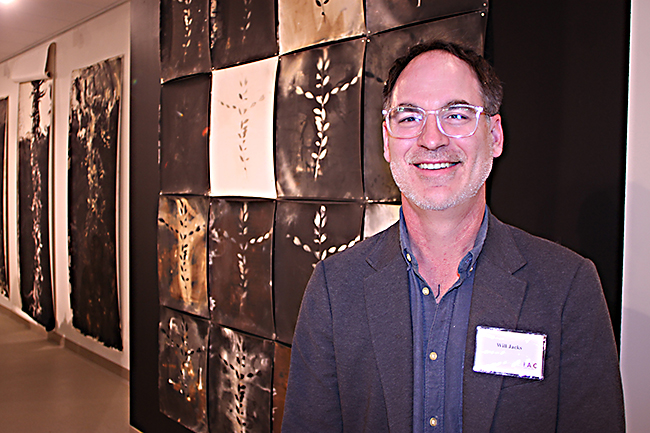 Huck Treadwell | The Messenger Will Jack’s “Absolute Rest” exhibit will be on display at the International Center for the Arts through April 3.

Will Jack’s “Absolute Rest” exhibit at the International Arts Center is a result of his exploration of direct connections.

Jacks said in the summer of 2019, he was still very much into documentary photography, but began to explore direct connections between people and objects. He said he wanted to find a way to visualize the impact of direct connections.

Jacks said there was a similarity between photography and physics in that photography attempts to explain the world through visualization and physics attempts to explain the world through mathematics. Jacks said, in physics, there is a concept referred to as absolute rest. It questions whether or not something can truly be still. He said time is defined as an interval between two events. He said for something to be truly at rest, time or all movement must be stopped. He said photography freezes both time and movement and captures it visually.

Jacks said he began to explore the concept of absolute rest in 2018. He said he wondered if he “might be able to break away from his own conditional perceptions and image-making.”

“In the spring of 2020, I was living on my family’s farm with three other artists,” Jacks said. “The COVID pandemic was beginning. Like the rest of the world, we hunkered down, worried about loved ones and did the best we could to deal with the uncertainty. We felt wholly connected to the world through the fact that everyone was affected by the sudden shutdown of our planet, and entirely disconnected by the fact the shutdown dramatically affected our ability to interact with anyone other than each other.”

Jacks said the work in Absolute Rest was made in response to the discomfort of the pandemic. Jacks said he focused on the peacefulness of the willow trees of the farm and many of the prints in the exhibit are the results of his early work with both the willow trees and the branches of the trees.

“The work in this exhibit is born of that exploration,” Jacks said. “It is a reconsideration of entrenched processes, but not a complete departure from them. Objects depicted only appear when in direct contact with the paper. Developer and fixer are applied through brushes and a physical touch and often merge to create unique tonal blends. This way of making results in portions of the image that will last for years while other sections are changing each day, until, eventually, they will disappear altogether. The print you see today will not be the print you see in two months, two years or two decades.”

“In our Junior Warriors program, more than 200 students were able to be inspired by Jack’s exhibit,” Jaxon said. “On March 31, we’ll also be having a free workshop for Troy University students and faculty and our next ArtSpark will also be inspired by Jack’s work. It’s important for us to show original work from the Troy University faculty so people can see what they are doing outside the classroom. This is a very unique show because it is an exploration into what we think we know about printmaking.”