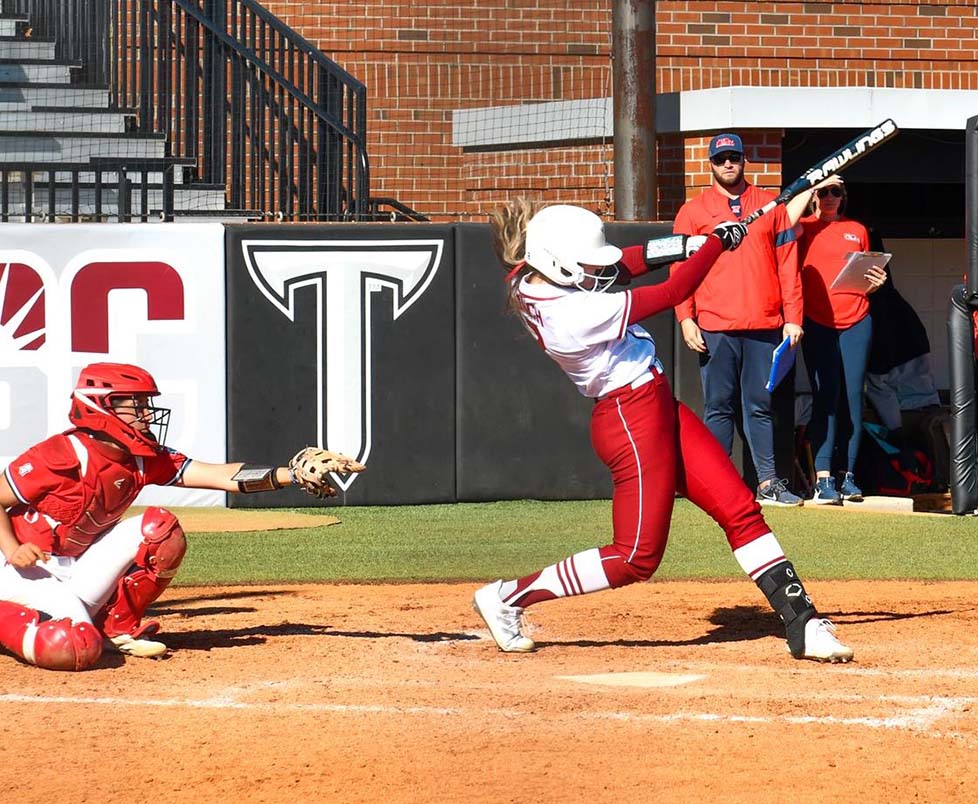 The Troy Trojans softball team hit the road this weekend and competed in the LSU Invitational in Baton Rouge, finishing the weekend with a 2-3 record.

Troy started off the series with a 5-4 upset win over the 21st ranked LSU Tigers on March 4. That win is Troy’s second of the season over a ranked opponent. Troy jumped out to a 2-0 lead in the top of the first inning after Anslee Finch drilled a two-run homer. Kennedi Gaton extended the lead to 3-0 in the fourth inning with a solo home run of her own.

Another LSU homer cut the lead to 5-4 in the bottom of the sixth inning but the Trojan defense held on to secure the 5-4 win.

Sinness led Troy at the plate going 2-for-4 with an RBI and a run. Leanna Johnson pitched all seven innings and struck out five batters, while giving up three hits and four earned runs.

After Troy jumped up to a 2-0 lead in the rematch between LSU and Troy later in the day, LSU exploded in the sixth inning with 10 unanswered runs to take the 10-2 win.

Libby Baker, Taylor McKinney, Audra Thompson and Sinness earned one hit each in game two with Sinness and Logan Calhoun each scoring a run.

Troy rebounded with an 11-1 win over Central Connecticut State on March 5. Horne went 2-for-2 with three runs and an RBI for the Trojans, while Baker struck out three batters and gave up just two hits and one earned run in three innings in the circle.

Later in the day, Troy lost to Louisiana Tech 6-2, however. Troy earned six hits in 29 at bats with Thompson being the lone Trojan with multiple hits on the day. Kaylee Chapman and Blake Gibson each scored a run.

Troy then rallied again when Finch belted a two-run homer into left field to cut the lead to 7-6 in the bottom of the seventh inning. The Trojans couldn’t find the tying run, though, and Louisiana Tech held on for the win.