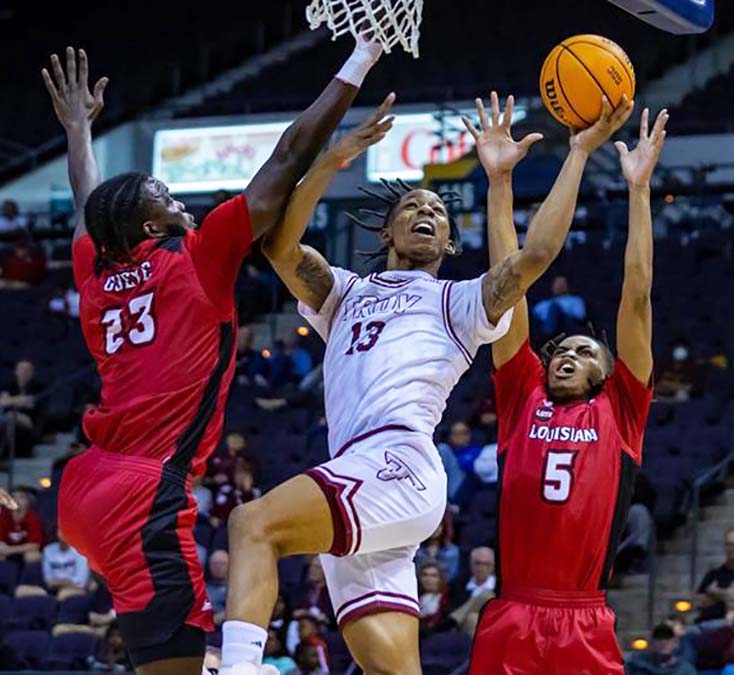 The Troy Trojans men’s basketball team (20-11) came up short 66-57 against Louisiana in the Sun Belt Tournament Semifinals on March 6.

The loss eliminates the Trojans from the Sun Belt Tournament and likely any hopes of making the NCAA Tournament for the first time since 2017. Troy never led in the game and trailed by as many as 17 points in the second half.

Troy managed to cut the deficit to 10 points on multiple occasions in the second half but every time Louisiana would stretch the lead further. Troy struggled shooting all night, shooting just 33 percent from the field, while Louisiana converted 39 percent of its shot attempts.

“We’re extremely disappointed. Our guys battled and played hard,” Troy coach Scott Cross said. “They have nothing to hang their heads about. We held them to 39.6 percent from the field, which is good enough to win a basketball game.

“Unfortunately, tonight was not our night offensively. Credit to them for playing well defensively. Sometimes you just have to see the ball go through a couple of times to get it going, but we couldn’t really get in a rhythm. This team had plenty of opportunities to fold, and they didn’t. Instead, they continued to fight, and I am super proud to be their basketball coach. These guys have changed Troy basketball.”

Troy reached the semifinals after knocking off Little Rock 69-62 in the quarterfinals on March 5. Odigie led the way in that win with 16 points and 11 rebounds, while Duke Deen chipped in with 15 points and Kieffer Punter scored 10 points.

While Troy’s NCAA Tournament hopes have been dashed, the Trojans still could earn a spot in either the NIT Tournament, College Basketball Invitational or CollegeInsider.com tournament.