ATOs to Walk Hard for fundraiser 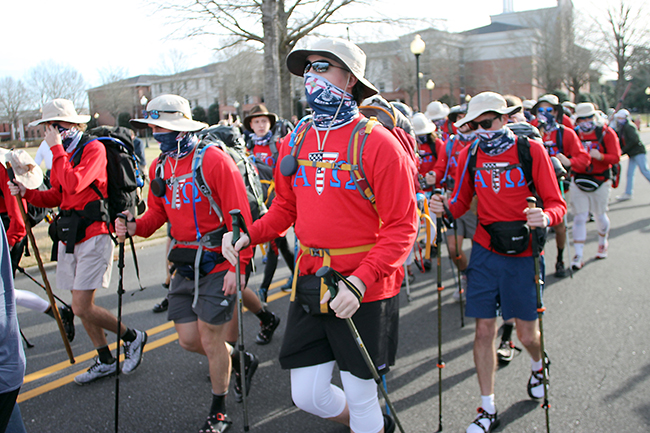 Huck Treadwell | The Messenger Members of Alpha Tau Omega raised $90,000 in last year’s Walk Hard fundraiser. The fraternity will once again hit the trail to raise funds for Jeep Sullivan’s Wounded Warriors Outdoor Adventures. The Fraternity will depart on the 128-mile hike on Friday and reach Panama City Beach on March 16.

The brothers from Alpha Tau Omega will once again embark on a 128-mile journey to raise money to help support Jeep Sullivan’s Wounded Warrior Outdoor Adventures.

“The blisters, joint pain, chafing and soreness are temporary and fleeting,” said Matthew Taylor, director of the 2022 Walk Hard campaign. “These things are minimal when compared to the physical and psychological injuries of the veterans we do it for.”

Jeep Sullivan’s Wounded Warrior Outdoor Adventures is a non-profit which assists soldiers in recovering from war, including those living with missing limbs and post-traumatic stress disorder (PTSD). The program funds outdoor activities for those who have served, helping to establish a sense of normalcy.

ATO brothers will depart from Troy’s quad at 8 a.m. on Friday and are scheduled to arrive at Panama City’s Welcome Center on March 16 around 2 p.m. The fraternity brothers will take the last steps of the journey onto the Panama City Beach pier around 4 p.m.