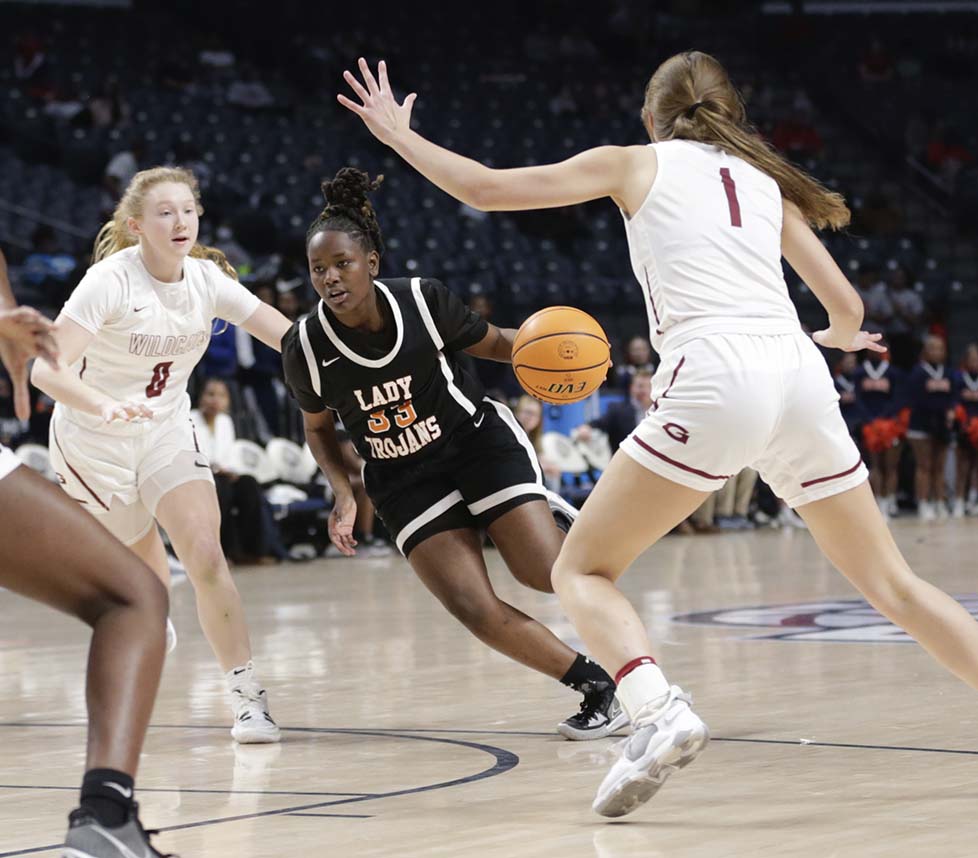 Madison Ousley (33) drives to the basket in the Final Four. (Photo by Dan Smith)

The Charles Henderson Lady Trojans saw their 2022 season come to a close in the Class 5A State Girls Basketball Semifinals at Legacy Arena in Birmingham by a score of 68-60 to the Guntersville Lady Cats.

After getting down by more than 20 points in the first half, Charles Henderson scratched and clawed their way back into the game to cut the lead down to just four points with under five minutes to go before the Lady Cats managed to pull away for good.

The two sides started off slow, tied 4-4 early on, before Guntersville began to rain down threes on the Lady Trojans. Guntersville went on a 16-2 during a three-minute stretch of the period and ultimately took a 23-6 lead into the second quarter. Guntersville knocked down five three-pointers in the period, including three consecutive threes at one point.

The Lady Cats continued to pile it on in the second quarter, stretching their lead out to 25 points at one point, before beginning to slow down the pace and burn clock taking a 36-16 lead into halftime.

Trailing 42-21 with 5:26 left in the third quarter, the Lady Trojans went on a 7-0 run to cut the lead to 42-28 with 3:27 left in the period. Guntersville again began to slow the pace down to kill clock. Madison Ousley buried a pair of threes to finish off the period, however, and cut the lead to 46-33 going into the final quarter.

KK Hobdy knocked down a layup and a free throw that cut the lead to 10 with 7:55 remaining in the fourth quarter, which was as close as the Lady Trojans had been since early in the first quarter.

Hobdy then sparked an 8-0 run with a three-pointer and a pair of free throws. Raven Williams knocked down a three of her own to cut the score down to 53-49 with 4:28 left. The Lady Cats responded with a 5-0 run to stretch the lead back out to 60-49 with just over three minutes remaining, however.

A 6-0 run by the Lady Trojans cut the lead to 60-55 with 2:41 left. Guntersville scored back-to-back jumpers to stretch the lead out to 64-55 with under two minutes left. Following a Guntersville free throw, Ousley buried another three to cut the Lady Cat lead to 65-58 with 43 seconds left. The Lady Cats spent the rest of the game trying to burn clock forcing the Lady Trojans to foul and secure time allowing Guntersville to hold on for the 68-60 win.

Hobdy led Charles Henderson in the semifinals with 26 points, seven rebounds and six assists, while Madison Ousley added 21 points and Raven Williams chipped in with 11 points and five rebounds. Guntersville was led by Mary George Vandergriff with 21 points, while Ivey Marsh scored 20 points and Tazi Harris scored 15 points with 11 rebounds.