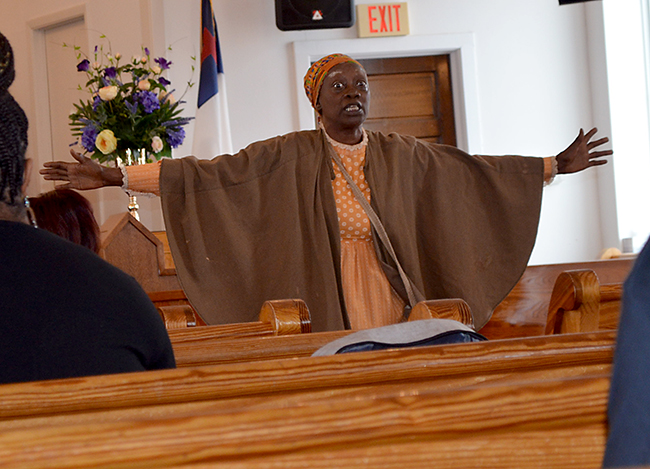 The story of abolitionist Harriet Tubman, who guided slaves to their freedom in the decade prior to the Civil War, was told at the Sunday morning worship service at St. Paul AME Church in Troy.

R, Abayomi Goodall, cultural artist and storyteller, portrayed Harriet Tubman and came into the church in much the same way that Harriet Tubman approached life, with assurance that what she was doing the right thing to do.

Tubman was born into slavery. She lived a meager existence on corn pones and sweet potatoes, Goodall said. She had no “learning” but she knew what was right and what was wrong and she knew holding people in bondage was wrong.

Harriet Tubman was just a little girl when she was sent out to set the muskrat traps.

“She played in the water but didn’t want to set no trap,” Goodall said. “She wanted freedom for herself and for the muskrats.

“Even as a little girl, Harriet Tubman believed everybody should be free.”

When she was 12 years old, Tubman was charged with cooking and cleaning at the big house and keeping the babies from crying. “How do you keep babies from crying?” she asked. And, she got a lickin’ every time the baby cried.

Tubman was relieved of housework to work with her daddy in the lumberyard, Goodall said. “When she was 12 years old, she was doing physical plantation work. When the overseer threw a heavy weight at a fugitive, Tubman stepped in, the weight struck her and broke her skull and she almost died.”

As a young woman, Harriet Tubman escaped from the plantation with the help of the Underground Railroad and made her way to Pennsylvania and freedom. But, she was not happy living free on her own. She wanted freedom for everyone. So, she returned to the South and dedicated herself to the mission of freedom. The mission was dangerous; the path was treacherous.

On the way north to freedom, Harriet Tubman followed the North Star, sang songs and mimicked an owl as ways to let others know when it was time to escape or it was too dangerous, Goodall said.

Traveling in the winter was safer when the nights were long. Harriet Tubman drugged babies and young children to keep them quiet so they would not be caught on the way to freedom.

She carried a pistol for protection and to intimidate those who decided to turn back. Freedom was too precious for them to give up, Goodall said.

Through it all Harriet Tubman never ran her train off the track and never lost a passenger.