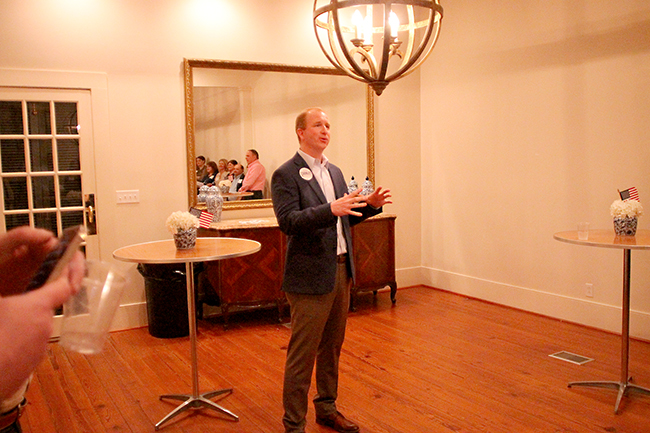 Josh Carnley, a Republican candidate for Alabama Senate District 31, recently made a campaign stop in Troy at the Emporium.

Carnley greeted guests at a reception and then spoke with supporters for a few minutes, discussing his background and what he would like to accomplish as an Alabama Senator.

Carnley said he was born and raised in Ino, a small community northeast of Kinston in Coffee County. He said growing up on the family farm, he learned the values of hard work, cooperation and faith. After graduating from Kinston High School, Carnley received a degree in agricultural science from Auburn University.

He continued farming and also opened an insurance agency, which was later purchased by Sanbuck Insurance. Carnley said he still works for Sanbuck, which is based in Troy.

Carnley said about 10 years ago, he became interested in what more he could do to served his community and state. He said he told Sen. Jimmy Holley he wanted to get into politics. After some advice from Holley, Carnley campaigned for a seat on the Coffee County Commission and was elected in 2010.

Carnley said if elected to the Senate, he was committed to honest government, continued economic development, improving education, making sure the state was fiscally responsible and would support the military and especially the state’s veterans.

Incumbent GOP Sen. Jimmy Holley will retire at the end of the current term. Carnley is seeking the Republican nomination for Holley’s seat along with incumbent Rep. Mike Jones, R-Andalusia. The Alabama primary election will be held May 24.