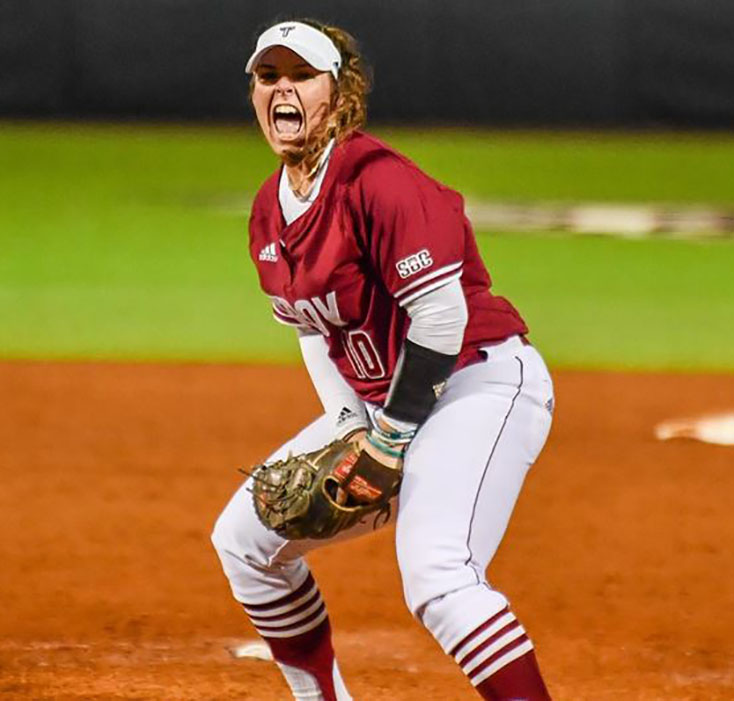 The Troy Trojans softball team (11-2) went 2-0 this weekend during the Carolina Classic, on the campus of South Carolina University, before weather halted that momentum.

On Feb. 27, Troy was trailing No. 7-ranked Virginia Tech 4-1 going into the fourth inning when inclement weather caused the game to be delayed and ultimately cancelled. Troy’s game with South Carolina, scheduled for later in the day, was also cancelled due to the weather.

In the first game of the series, Troy bested Miami (OH) 5-1 in extra innings. With the game tied 7-7 after seven innings of play, the Trojans struck in the top of the eighth inning. After Logan Calhoun scored on an error in the eighth inning to put Troy ahead, Taylor McKinney blasted a three-run home run over leftfield. Libby Baker also hit a home run earlier in the game. Jade Sinness, Baker, Emma Grace Walker, McKinney and Calhoun all scored one run.

Leanna Johnson was as dominant as ever in the circle, fanning eight batters and giving up just one hit with no earned runs.

The Trojans wrapped up their conquering of schools from Ohio on Feb. 26 with a 4-0 upset over No. 25-ranked Ohio State. The win gave Troy its sixth of the season over a team that played in NCAA Regionals last season.

Johnson was once again almost unhittable in the circle, mowing down 10 batters, while giving up just two hits and no runs. Baker also hit her second homer of the weekend in the win. Sinness, McKinney, Candela Figueroa and Calhoun also scored one run each.

The Trojans will remain in SEC country this weekend as they compete in the LSU Invitational March 4 through March 6. Troy will face off twice against LSU, once against Central Connecticut State and twice against Louisiana Tech during the weekend of play.