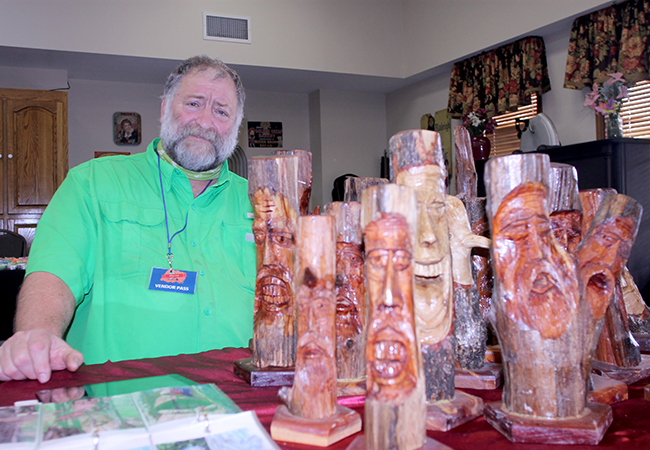 Huck Treadwell | The Messenger Woodcarver Tim Tingle has carved more than 50 faces and mythical beasts at Orr Park in Montevallo.

Tingle is best known for his carvings of fantastical faces and beasts at Orr Park in Montevallo. Orr Park is a 40-acre recreation park that was built on land donated by former Montevallo Mayor Dr. Milton Orr. A section of the park is named Tinglewood, after Tingle, who made more than 50 carvings on dead trees along the waterway.

“In 1993, there was a big ice storm that killed a lot of the cedars,” Tingle said. “I was driving by the park and saw them cleaning up after the storm and asked if I could have some of the cedar for my woodcarvings. They said no, because one of [Orr’s] conditions for donating the land was that no wood could be removed from the park.

“Well, I waited until they left and I carved a face on one of the cedar stumps. I went back and carved a second one. I wasn’t caught, so I carved a third one. Some people had seen the carvings and everybody was searching all over the park to see if they could find a new one.”

Tingle said he kept returning to the park and eventually got caught while carving the sixth one.

“I went home and turned off the lights and waited for the police to come get me,” Tingle said. “But, I got a call from the city saying they liked what I had done and I could keep doing it as long as I only carved on dead trees and didn’t carve anything obscene. Well, I had only been carving on dead trees anyway, so I kept doing it.”

Tingle said he’s done a total of 58 carvings in the park, but only 53 remain. He said one tree was struck by lightning and some just fell over. He said he usually does two or three new carvings a year.

“I’ve gotten a lot of publicity from that over the years,” Tingle said. “I did all of the carvings free and never got paid for anything. But, the publicity is priceless. People come from all over to see the park. It attracts a lot of people to the park. Some people may be coming to see the park and other people may be passing through Alabama and stop to see the park because they heard about it. People all around the world know about it because of the internet. A lot of people also stop by the park to see if they can catch me making a carving.”

Tingle said now that the weather is warming up, he plans to return to the park soon to make another carving. Orr Park is located at 277 Park Drive in Montevallo. The section of the park dubbed Tinglewood, lies along Shoal Creek.