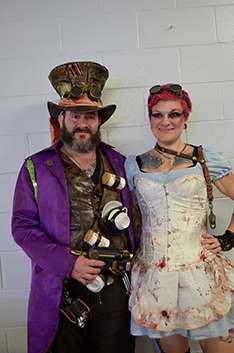 Jaine Treadwell | The Messenger A highlight of Imagi-Con 2022 was the costume contest and it was highly contested. The first place winners were the Friar Strombolee Steampunk Family, the Mad Hatter and Alice; second place; other winners included the Pokemon Family (the Gladwells); and third place, the Scarborough Family. The costume Cosplay winners were, Ashley Patrick, individual youth; Arron Yeager, Attack on Titan; and 12 and under, Anari Parzy.

Imagi Con got off to a virtual start in 2021 but came on in-person strong Saturday in downtown Brundidge.

“Imagi Con 2022 was held at several locations around town, so we don’t have an exact attendance number yet, “Nicholson said. “The Tupper Lightfoot Memorial Library was the central location and we also had activities at the Bass House, Coast and Creek and Brundidge Station.  Food vendors were located on the grounds as was the Escape bus. We were pleased with the number of locations and also with the response of the participants and the attendees.”

Nicholson said the comments all around were favorable and encouraging.

“We had suggestions as to how we might do things a little differently next time and we greatly appreciated those,” she said. “We thank the City of Brundidge for its support and all those who helped in the many different ways of preparation to make Imagi-Con 2022 a success and all those who donated their time and talents to help make the first in-person Imagi-Con a success. And, we really want thank all of those who came and enjoyed the event. Their support was our encouragement to begin now working ahead to Imagi-Con 2023.