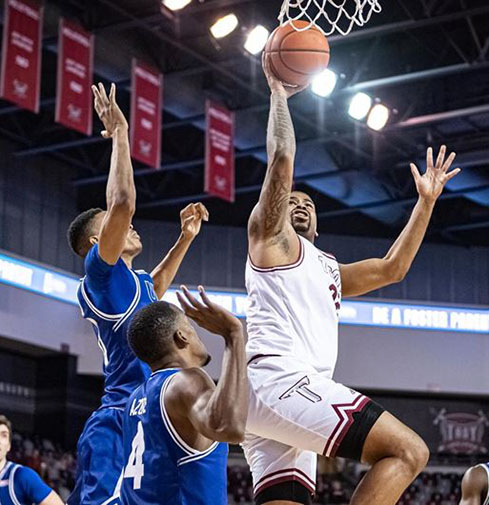 With a 59-53 win over the UT-Arlington Mavericks on Feb. 23, the Troy Trojans (19-9, 10-5) secured a first round bye in the upcoming Sun Belt Conference Tournament.

While Troy needed to win out for a chance at winning the regular season conference crown – and a No. 1 seed in the tournament – the Trojans also needed South Alabama to beat Texas State Wednesday night. The Bobcats, however, pulled off the 55-52 win over South Alabama.

Troy dominated UTA in the rebound battle, 46-23, and rained down three-pointers in the win over the Mavs. Troy also knocked down 10-of-26 threes, including 5-of-11 in the second half.

With Troy trailing by three with just under four minutes remaining, Zay Williams knocked down a deep three to tie the score 48-48. Desmond Williams then knocked down a long three of his own putting Troy up 51-48. Zay Williams hit a fade away jumper with 1:12 left to put Troy up 53-48 for good, as the rest of the game was a free throw contest.

“UTA played with a ton of effort. They did get us a little bit out of sync offensively. To have 22 turnovers is probably a season-high for us, so they were very disruptive. I think we won the game on the glass. To have 46 rebounds in a game and outrebound them by 20-plus is why we were able to pull this one out. It was a hard-fought win.”

While Troy’s goal of earning the regular season crown is no longer in reach, the Trojans still have plenty to play for when Texas State comes into Trojan Arena this Friday in the regular season finale. Cross has said that the Trojans set a goal of 20 or more wins this season and a win Friday would secure the first 20-win season for the men’s team since 2010.

Troy can also secure the No. 2 seed in the Sun Belt Tournament with a win and an Appalachian State loss this weekend. Additionally, the game will be televised nationally on ESPN 2 at 8 p.m.