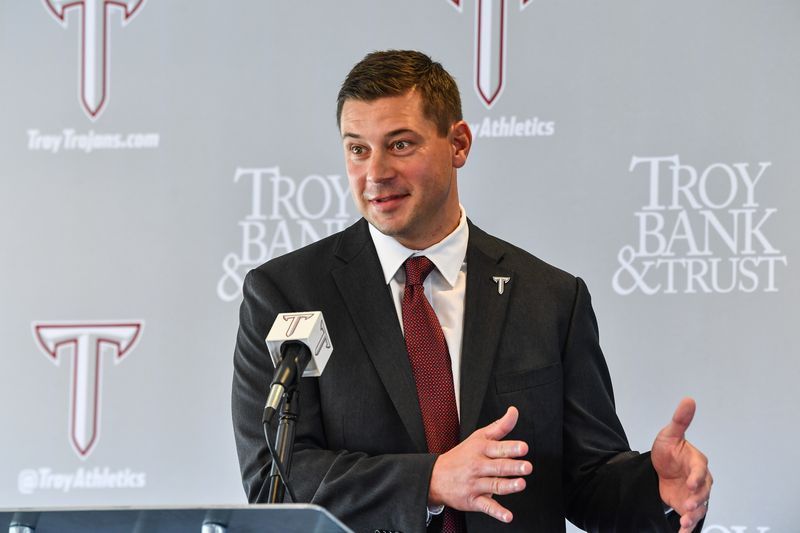 Troy coach Jon Sumrall will lead his Trojans into spring practices for the first time in March. (Photo courtesy of Troy University Athletics)

New Troy University head football coach Jon Sumrall spoke with The Messenger this week to discuss how his new staff came together and what he expects from upcoming spring practices.

Sumrall has been the head coach at Troy for two months and one of his first orders of business was solidifying a top-shelf coaching staff. One of the things that stands out most about Sumrall’s coaching staff is the fact that it is one of the youngest coaches staffs in the country, but is still brimming with experience.

“I think you have to look for the right mixture, we want hungry, energetic people regardless of age,” Sumrall said. “I felt like there needed to be a certain level of expertise and experience of coaching college football, but at the same time I think you want energetic, hungry young guys if you can get that (mix).

“You also want to have guys that want to be at Troy and are passionate about this place.”

Sumrall pointed to new tight ends coach Evan McKissack as a prime example of what he was looking for in his staff.
“Evan McKissack played here,” Sumrall said. “He played here and was a guy that was an overachiever as a player and this place means a lot to him.

“He’s also coached in high school in the states of Alabama and Georgia and has coached college football in the SEC and at Murray State. He’s been around and done a lot of different things at different levels.”

A name that stands out amongst football fans that look at the staff is new offensive line coach Cole Popovich, who is not only just 37 years old but has coaching experience at both the college and NFL levels. He served as an offensive assistant, assistant running backs coach and offensive line coach for the New England Patriots for five seasons.

Sumrall said that he and Popovich had a number of mutual connections, which resulted in communications between the two once Sumrall was hired at Troy. Sumrall said hiring an offensive line coach was also one of his top priorities after getting the job.

“We had several mutual connections and mutual relationships with different people,” Sumrall said. “One of the first things that happened when I got the job is Cole reached out via text.

“Once I went through the process of getting the job and worked out what I wanted the offensive and defensive philosophy to look like and worked through hiring the coordinators, I turned my focus solely to the offensive line hire.”

After having discussions with Popovich, and those that have worked with him, Sumrall said it was clear he was the man for the job.

“Cole is very knowledgeable and a highly intellectual offensive line coach but he also has a really easy way of making things simple, understandable, relatable and very common sense for our players,” Sumrall said. “He’s a great communicator and I think if you’ve coached at the NFL level that long and done it in a place like the Patriots, with what they’ve done and the standard they’ve held, is impressive.

“Cole had a lot of people – some I knew and some I didn’t know well – that spoke highly on his behalf. After I got to know him more and more after we had some conversations, I started to recognize that this guy was a terrific fit for Troy and we’re glad he wanted to come here.”

The importance of the offensive line hire comes with a future change in the offensive philosophy at Troy, which Sumrall confirmed is coming. For more than a decade Troy has been known as an up-tempo offense with emphasis on the passing game, especially under former coach Chip Lindsey. Under Neal Brown, the offense was more balanced at times, however.

With Craddock calling the plays at SMU in 2017, the Mustangs’ balanced offensive attack averaged nearly 200 yards rushing per game and nearly 300 yard passing. His Arkansas offenses were similarly balanced.

“We’re doing some different things schematically and terminology wise and there will be significant changes,” Sumrall flatly said of the offense. “If there are some things that were done in the past that were good that match our players’ strengths we’ll play to those strengths, as well.

“Your consistently, as a coach, evaluating and identifying areas where you can improve and how you can improve and have room for growth and development whether that is schematically or in terms of each individual player. We are making some changes offensively but we want to make sure we teach things in great detail and that it makes sense to our players.”

Troy will begin the first spring practice session under Sumrall on March 22 and Sumrall said making sure the players understand what is expected of them and laying the foundation for the program are essential goals for spring practices.

“Through the spring we want to create an environment where our guys understand what the expectations and standards here are in terms of work ethic and our core values,” he said. “We want them to understand what we’re hunting every day and what we’re pursuing. We’d like to begin to solidify and establish our base identity on offense, defense and the kicking game, as well.

“We’ll constantly be adding and tweaking what we’re doing to get better but we want to leave the spring with a good foundation built upon what we do and what we want our football team and our program to look like.”