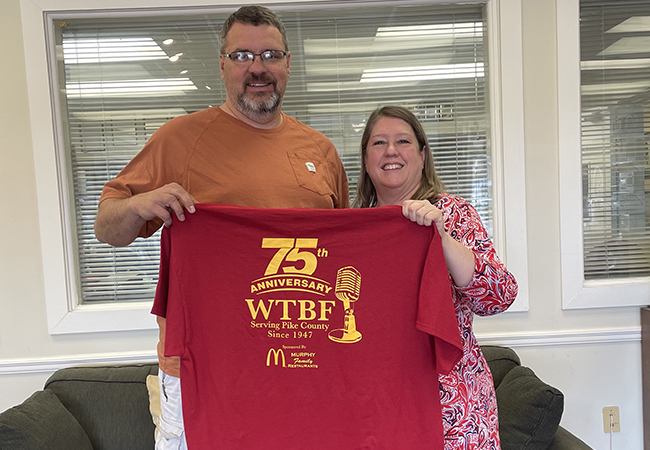 WTBF-FM is a radio station broadcasting a mixed talk/personality and oldies music format licensed to Troy, Alabama. United States. The station is currently owned by Troy Broadcasting Corporation from Westwood One Media.

That’s rather cut and dried for a radio station that has been, for 75 years, the voice of Pike County. Today, February 25, 2022, WTBF is celebrating its 75th anniversary and those who have been and are a part of the “hometown” radio’s audiences are invited to stop by WTBF and join the celebration of this milestone event.

WTBF was originally located on the Troy University campus by the lagoon and was “at home” on campus from 1947 until 1997. The “original” radio station was taken down in February 2008.

“On that day, Joe Gilchrist flipped the switch at the transmitter site,” McCall said. “Larry Wells was on with one CD player, at what the staffers called the ‘Skylab,’ the old studio, and Jim Roling and Doc Kirby were waiting at the brand new studio. At 3 p.m., Larry flipped the switch and Jim and Doc signed on from the new location.”

“Jess Jordan and Bob “Pappy” Tolbert were the mainstays on WTBF Radio during its first 30 years,” McCall said. “Their voices were very familiar to listeners in Pike County and both were extremely active in the Troy community.

Joe Gilchrist, the original engineer, owned the station, along with Asa Dudley and Jim Roling, who worked at the station as a teenager in the 1950s and 1960s. McCall said. “He left for South Carolina and retired in 1980 and bought out one of the original owners. Roling hosted ‘The Morning Show’ beginning in 1980 until his semi-retirement in 2007 and was an icon in Pike County.”

David “Doc” Kirby has been the program director since 1974, with one break from 1985 until 1986, when he was a band director at a local school and was replaced by the Morning Show co-host Joey Meredith.

“Since 1986, ‘Doc’ has developed a weekly program called ‘On the Bookshelf,’ which is syndicated on the Alabama Radio Network,” McCall said. “Doc has also become a Methodist minister.”

Other long-term employees include Ralph Black, who worked at WTBF-Radio from the late 1970s until the 1980s when he started the Two State Sports Network.

“Ralph was the voice heard on every broadcast game,” McCall said. “He was bought out by the college in 2002 and replaced by Barry McKnight. Ralph came back to WTBF in 2002 and became the host of “The Morning Show.”

Other popular programs include “Crosby’s Country Classics,” which was hosted by local personality Ray Crosby from 1909 to 2006. Crosby returned in 2008. In late 2007, Joey Meredith returned to the airwaves on WTBF helming the popular Sunday morning gospel music request show. Allen Stevens helps, Joey with the abundance of phone calls on Sunday mornings.”

The engineer is Wade Giddens, who spends three days a week at WTBF.  Joe Gilchrist retired after 59 years on the job. His son, Richard Gilchrist, owns the station with Angie Roling and Oma Jean Dudley.