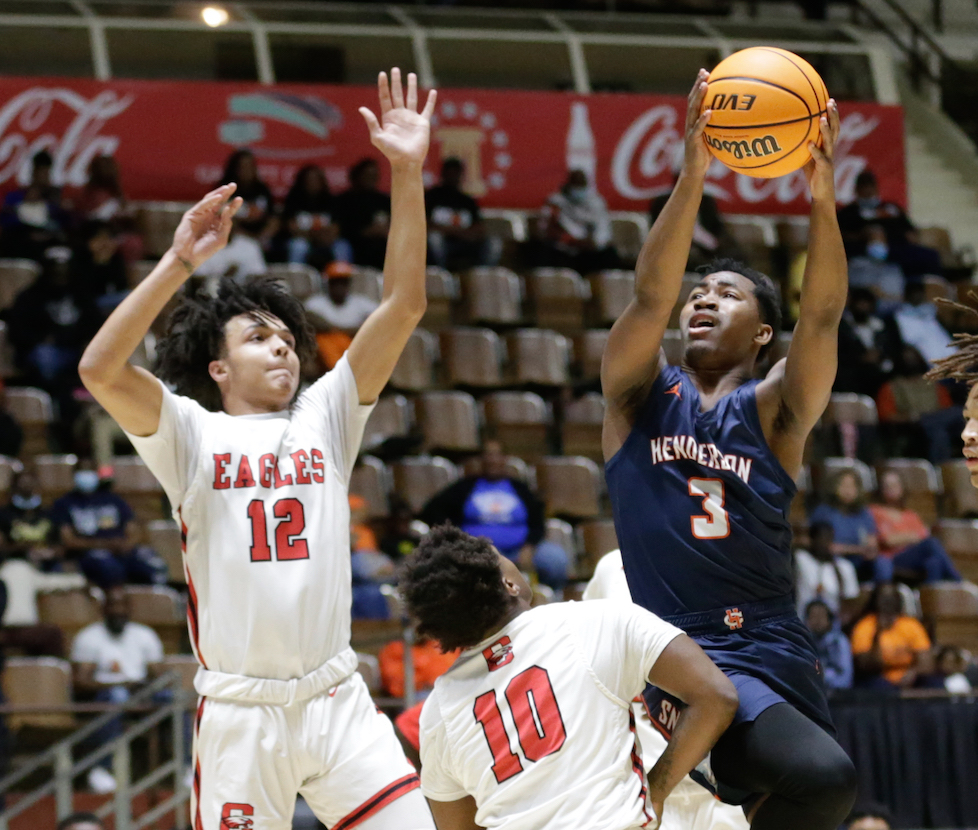 The Charles Henderson Trojans historic 2021 season came to an end on Feb. 23 as they fell to the Carroll Eagles 70-67 in a wild Class 5A Boys Basketball Regional Finals.

Charles Henderson trailed 16-12 going into the second quarter after Carroll jumped out to a 5-0 lead early and led 12-4 with 3:43 remaining in the period. The Trojans were able to chip away at the lead, going on a 8-4 run to close out the period, however.

Carroll went on an 8-0 run to extend its lead to 32-20 as Charles Henderson went three minutes without a point. Akeives Shorts then drove to the basket for a layup followed by a three-pointer from Youngblood that cut Carroll’s lead to 34-25 with 1:10 left in the half.

Carroll and Charles Henderson traded baskets before Trojan Tyler Carlton hit a buzzer-beating layup to cut the Eagle lead to 36-29 at halftime.

Shorts and Jayden Spearman hit back-to-back jumpers to cut Carroll’s lead to 36-33 early in the third quarter and then the two sides began to exchange points until the Trojans cut the lead to 46-43 with 3:04 left in the period.

Cody Youngblood then drilled a three to tie the score 46-46 with 2:25 left followed by a three from Carroll’s Raquile Reed to retake the lead 49-46 with 2:14 left. That sequence jumpstarted a feverish back-and-forth slugfest between the two sides that continued for the remainder of the period.

Shorts buried a pair of free throws on Charles Henderson’s next trip down the court to bring the Trojans within one but Carroll came right back with a layup to extend the lead to 51-48 with 1:50 left in the quarter.

Shorts hit a layup on the next Trojan possession and then stole the inbounds pass and connected on another layup to give the Trojans their first lead of the game 52-51 with 1:50 remaining in the third quarter.

Reed swished another three with 59 seconds left to retake the lead for the Eagles 54-52, but Shorts tied the score once again with a putback layup off a rebound with 25 seconds left. Johnny Coleman gave Carroll a 56-54 lead with 18 seconds left but Shorts came right back with a layup with just six seconds left in the period to tie the score 56-56 going into the final quarter of play.

Carroll and Charles Henderson continued to trade body blows to start the fourth quarter until Bryson Dawkins and Reed knocked down back-to-back threes that put Carroll up 64-58 with 6:00 left in the game.

Dawkins hit a layup with just over two minutes remaining to put Carroll up 68-63. Shorts came right back and converted a layup with 1:13 left to bring Charles Henderson within three points again. The Trojans had a shot at tying things up with a three-pointer on the next possession but it bounced off the rim.

Charles Henderson was forced to commit fouls to save time and the Eagles missed their free throw attempt on the next possession. Knox then slammed a putback dunk off a rebound to cut the Eagle lead to 68-67 with just 11 seconds remaining.

The Trojans immediately fouled Carroll’s Dawkins, who was 1-of-4 at the charity stripe at the point. Dawkins knocked down both of his free throw attempts, however, to extend the lead to 70-67 with 10 seconds remaining. Shorts managed to get off a desperation three-point attempt at the buzzer but it bounced off the rim securing the Carroll win.

“We played hard, we just made too many mental mistakes,” Charles Henderson coach Tim Fayson said. “(Carroll) shot the ball really well and had a good game plan coming in.

“They made big shots down the stretch. We played good defense but they made some big shots. Just have to credit them for showing up in the big moments.”

Despite the frustrating end, the Trojans made their first Elite 8 appearance since 2004.

“It was a learning experience,” Fayson said of his team. “We felt like we had a team that could compete for a state championship but you have to get it done on the floor.

“So, it’s disappointing but I think this senior group laid a good foundation for our program. We have something to shoot for (in the future) and I’m proud of them. I’m really proud of the way they handled everything this season and the way they conducted themselves.”

Dawkins earned Tournament MVP as he led Carroll with 24 points and nine rebounds, while Reed added 23 points in the win.