For the third straight season, and the sixth time in the last nine years, the Charles Henderson Lady Trojans are headed to the Class 5A Final Four.

The Lady Trojans eliminated the Talladega Lady Tigers by a score of 39-29 in the Class 5A Girls Regional Basketball Finals in Montgomery on Feb. 23.

The Lady Trojans then went on a 10-3 run to take a 17-13 lead with 1:42 left. The two sides then exchanged shots to bring the score to 20-16 with under 40 seconds remaining. Talladega attempted to hold the ball for the last shot of the half but Charles Henderson’s KK Hobdy picked the pocket of a Tiger player and raced down the court to hit a layup as time expired to extend the Lady Trojan lead to 22-16 at halftime.

With 1:32 left, Hobdy took a hard shot on a foul at midcourt but still managed to drill both of her free throw attempts to extend the Charles Henderson lead to 34-28. After a Talladega free throw, Charles Henderson’s Hobdy knocked down another free throw to extend the lead to 35-29 with 28 seconds remaining. Talladega was forced to foul for the remainder of the game to conserve time and the Lady Trojans held on for the 39-29 win.

The Lady Trojans outrebounded Talladega 41-35 and forced 15 turnovers in the win. Charles Henderson also knocked down 14-of-24 free throws down the stretch.

“Every team is special but the odds were against us (this year),” Charles Henderson coach Dyneshia Jones said. “They did a phenomenal job today and played really hard.”

The Lady Trojans will now advance to the Class 5A State Semifinals against Guntersville on March 2 in Birmingham. 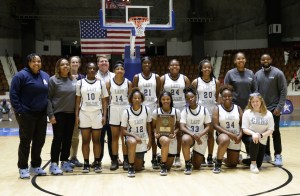 The Lady Trojans will head to the Final Four in Birmingham next month. (Photo by Dan Smith)

“We just need to continue to improve,” Jones said. “There is always room for improvement and it’s our job as coaches to figure out what we need to do defensively and how to attack their defense. Defense wins ball games, though, so we have to make sure we’re prepared and ready.”