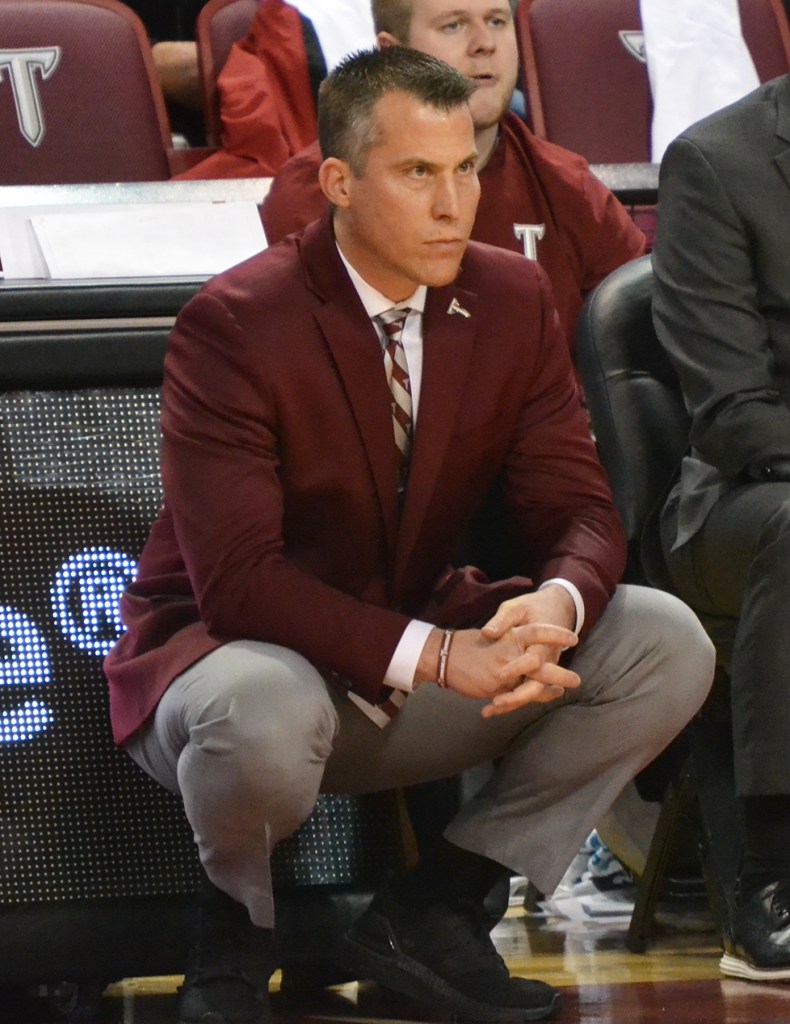 Troy coach Scott Cross and his Trojans still have their 2022 goals in front of them. (Photo by Josh Boutwell)

Troy University men’s basketball coach Scott Cross spoke with The Messenger on Feb. 22, ahead of this week’s pivotal conference games.

With just two games left in the regular season, Troy has the opportunity to earn the No. 1 seed – and regular season conference crown – in the Sun Belt Conference Tournament in March. Troy needs Appalachian State to lose at least one of its final two games and the Trojans also need South Alabama to beat Texas State tomorrow night. All of that doesn’t matter, though, if Troy doesn’t win out, as well.

“We don’t have a chance if we don’t win out,” Cross said. “Whether (the other two scenarios) happens or not, who knows, but we have to take care of business in both of our games regardless.”

Troy will host UT-Arlington tomorrow night and Texas State on Feb. 25 on national television. Cross said coming into the season Troy set goals of 20 or more wins, a Sun Belt Championship and making the NCAA Tournament. All three of those goals are still in front of them.

“That was one of our three goals coming into the season,” Cross said of earning the No. 1 seed and regular season conference crown. “All three of those goals are still in play. We need some breaks but we also need to play great, too. On Feb. 22 all of the goals we want to accomplish are still in play, which is a positive this time of year.”

Troy is coming off a roller-coast of a week after defeating Appalachian State before falling to Coastal Carolina, both on the road, last week.

“I think we played our best basketball (game) against Appalachian State,” Cross said. “We had their number a little bit and I think we match up really well with (them). Going to Coastal, I don’t think we were quite as locked in, probably, mentally.

“Still, with all that said, we cut the lead to three with a couple of minutes to go. Our guys kept playing and they easily could have folded up. There are no moral victories. We needed to win that game to control our own destiny and we didn’t get it done. Now, we have to rely on some other teams to help us out.”

Cross and the Trojans are hoping for a big crowd against both UT-Arlington and Texas State this week.

“It’s huge, especially in those close, tight games,” Cross said of the impact a rowdy Trojan Arena has. “A three-pointer or a dunk or layup and the crowd goes nuts and it energizes your guys to play that much harder.

“It gives your guys confidence on the offensive end of the court, too. I think home court advantage, to me, is worth 10 points or so. I think I would much rather play at home down 10 than go on the road and have it even. Our fans have been great all year long and for the most part we’ve played well at home with the exception of the Little Rock and Southeast Louisiana games. The South Alabama game was phenomenal and one of the best atmospheres I’ve ever been a part of. Assuming we take care of business on Wednesday, I expect the game on Friday will be the same type of atmosphere.”

The Texas State game will be nationally televised on ESPN 2 and Troy is calling for a “white out” from Trojan fans. Cross said besides a fired up Trojan Arena, he needs toughness from his team this week.