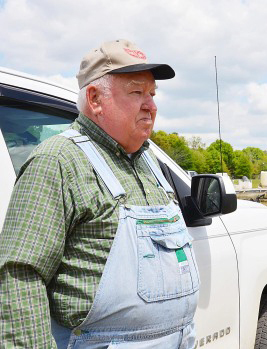 File Photo James O. Johnson was a highly respected member of the Pike County Cattlemen’s Association and was also deeply involved in the community.

James O. Johnson was “as good as they come.”

Johnson’s death on February 21, 2022, was met with sadness among all those who knew him. Johnson was a family man, a friend and a dedicated member of his church and his community. The octogenarian’s handprint is on everything he touched and is deeply ingrained in the Pike County Cattlemen’s Association.

“Any time you mentioned the ‘Cattlemen’, James O. came to mind, when he was active and when he was no longer able to be involved,” said Johnny Garrett, a Cattleman and friend. “I don’t know of anybody that didn’t like, respect and appreciate James O. He was always willing to do what needed to be done, no matter what or when.”

Johnson served as president of the Pike County Cattlemen’s Association several times and he took just a much interest and pride in being the chief cook and bottle washer in the kitchen.

“I worked long hours with James O. in the kitchen and did what he told me to do,” Garrett said, laughing. “He was famous for his hamburgers and he deserved to be.”

“James O. was involved in all the programs and activities of the Cattlemen and the Farm-City program, too,” Garrett said. “He was fun to be around but he was not bashful about telling it like it was and he was just about right every time. James O. was good to work with and a good friend to me. I thought the world of him. There won’t be another one like him.”

Don Renfroe said he can’t remember not knowing James O. Johnson and not being positively influenced by him.

“He was a servant of the community,” Renfroe said. “He had his hands in the big things that were going on and the little things, too. But, to James O., everything was important, whether it was cooking hamburgers for the rodeo or working to get the Cattlemen’s building off the ground.”

Renfroe said Johnson had a strong work ethic no matter how large or small an undertaking.

“Everybody knew James O. and respected him and depended on him,” Renfroe said. “When the Cattlemen building opened, James O. was the overseer, the caretaker. He took care of making reservations and took his turn as Cattlemen president.”

Renfroe said, too, that Johnson was a supporter of the youth programs and encouraged the young people to participate.

“His grandchildren were active in 4-H and in the calf and heifer show and they were an encouragement to other young people,” he said.  “James O. was always there when you needed him and, if he wasn’t, he would come when you called him. He was a good fellow to work with and as good a friend as you could ask for. If you knew him, you’re going to miss him. If you didn’t know him, you missed knowing as good a man as you could find.”