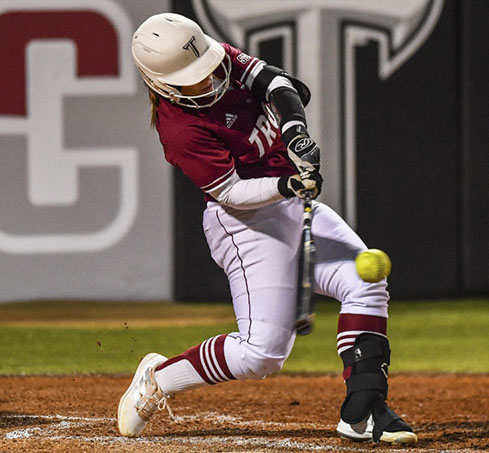 During the Troy Invitational, the Troy Trojans softball team went 4-1 including splitting a series with Ole Miss.

Troy picked up an 8-0 win over Nicholls on Feb. 18 followed by a 9-0 win over Eastern Kentucky.

Against Nicholls, Jade Sinness went 2-for-3 at the plate with three runs, while Kelly Horne went 3-for-4 with an RBI and two runs. Leanna Johnson pitched two innings and struck out five batters, while giving up no hits or runs.

Anslee Finch went 2-for-2 with two RBIs against Eastern Kentucky, while Taylor McKinney earned three RBIs and a home run. Johnson threw a no-hitter in the circle, mowing down 14 batters in the process.

After dominating the first two games, things heated up as Troy survived Nichols 10-9 on Feb. 19.

Troy led 9-4 going into the fifth inning when Nicholls earned five innings in the top of the fifth to tie the score 9-9. In the bottom of the fifth inning, Katie Lively belted a fly ball into center field, with the bases loaded, that drove Emma Grace Walker home for the eventual winning run.

Brianna Bailey and Libby Baker each struck out three batters, while Johnson struck out five in the circle.

Troy closed out the day on Feb. 19, with a 4-3 win over the SEC’s Ole Miss, which is the second consecutive year the Trojans have knocked off the Rebels.

With Ole Miss leading 2-0 going into the bottom of the third inning, Troy’s Sinness drove home Candela Figeura and then Horne drove home Sinness to tie the score 2-2. Finch then sent a two-run homer sailing over right field to put the Trojans up 4-2.

Ole Miss managed to score one final run in the top of the seventh inning but couldn’t find any more runs.

Horne went 2-for-2 at the plate with an RBI and a run, while Finch went 1-for-3 with two RBIs, a home run and a run scored. Johnson pitched all seven innings and fanned eight batters, while giving up seven hits and three runs.

Ole Miss extended the lead to 7-1 in the top of the fifth inning, but Troy’s bats caught fire in the bottom of the fifth. First, Logan Calhoun drove Aayanah Hughes home with a single into left field and then Horne hit a three-run homer to cut Ole Miss’ lead to 7-5.

Ole Miss scored another run in the top of the sixth inning to extend the lead back out to 8-5. In the bottom of the sixth, Sinness drove Katelynn de Leon home with an RBI double into center field to cut the lead to 8-6. Finch then drilled a single into left field to drive Sinness home and bring the Trojans within one run.

Troy couldn’t get back into scoring position in the sixth inning and in the seventh inning, de Leon was left stranded on base as Ole Miss earned the three outs to secure the win.

“I am really proud of how resilient we were,” Troy co-interim coach Taylor Smartt said. “They fought and never thought it was over. They continued to fight and battle their way back.

“They have done that in several of our games so far, and I think that shows they’re calm and composed. I knew they would give themselves a chance by making adjustments at the plate.”

Troy will head to South Carolina this weekend to take part in the Carolina Classic with games against Miami (OH), Ohio Sate, Virginia Tech and South Carolina.