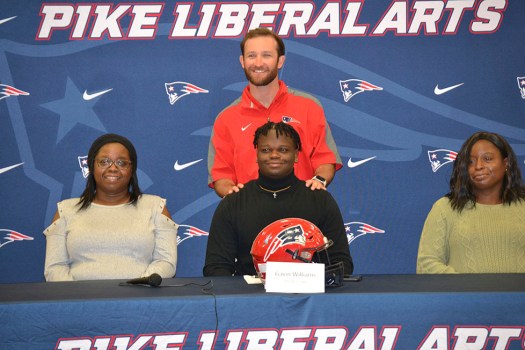 Pictured at the signing, from left, is Felicia Williams, Rush Hixon, Gavin Williams and Sabrina Owens. (Photos by Josh Boutwell) 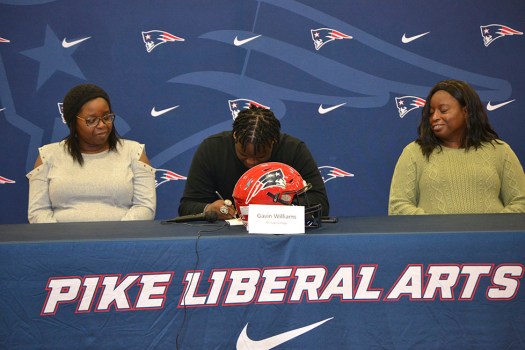 “Millsaps just felt like home when I first went there,” Williams said of his decision. “All the people and teammates I met there were great. They just made it seem like home.”

Williams said his teammates and coaches at Pike made him feel the same way when he first came to the school.

Williams was a key part of the defense on the past two back-to-back state championship teams.

“Gavin has been instrumental in the last two state titles for us,” Pike coach Rush Hixon said. “Gavin played linebacker and then moved to defensive end because of a team need.

“Not only was Gavin a major part of our football program the last two years, but he has been an awesome person to have walking the halls of our school, as well. We are extremely proud of Gavin and everything he’s accomplished and can’t wait to continue to watch him succeed at the next level.”

Williams recorded 82 tackles and five sacks as a senior in 2021 and was named an AISA All-Star along with winning the defensive MVP award at the All-American Bowl. Williams said he would play linebacker at Millsaps and plans to major in business.

“My first goal is to get my degree and my second goal is to just keep playing football,” Williams said.