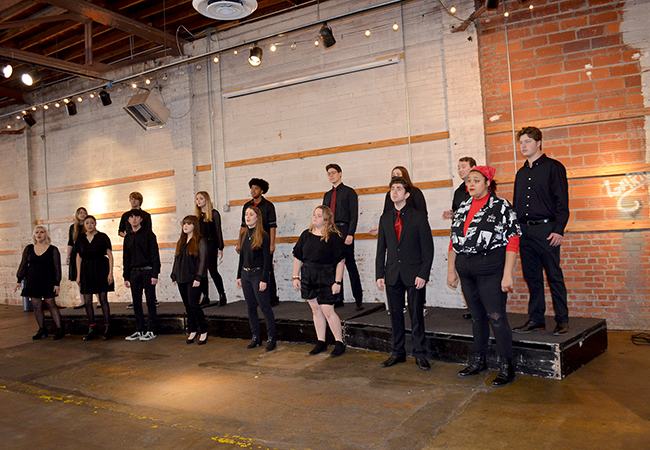 Jaine Treadwell | The Messenger Frequency packed The Studio in downtown Troy Monday night for “A Valentine’s Day Cabaret: An Evening of Love Songs. Frequency is an auditioned, select vocal jazz ensemble that is devoted to the performance of contemporary a cappella choral pieces.

To say that The Studio in downtown Troy was packed Monday night for frequency’s Valentine’s Day 2022 concert would be an understatement.

Scurrying just before show time was necessary to accommodate those came to enjoy “A Valentine’s Day Cabaret: An Evening of Love Songs.”

“The turnout was just phenomenal,” said Brenda Campbell, director of the sponsoring Johnson Center for the Arts. “We were expecting a good crowd but we had no idea. We were excited that so many people came out to hear this incredibly talented college students under the direction of our own Scott Sexton.”

Campbell said the audience was exceptionally attentive throughout the concert.

“You could have heard a pin drop,” she said. “It was so quiet that, when a potato chip bag crinkled, it was a loud noise.

Campbell said when the concert ended, the audience erupted in applause.

“There was such great show of appreciation for the pride in the talented students and the pride the community has in Scott,” Campbell said. “The frequency members showed so much emotion in their singing, as a group and individually. They captured the spirit of the day, Valentine’s Day, with their love songs. ‘An Evening of Love Songs’ was a perfect way to end Valentine’s Day 2022.

The Valentine’s Day program featured familiar love songs by the ensemble and soloists, including “Can’t Help Falling in Love,” “Over the Rainbow,” “Crazy” and “Can’t take My Eyes Off You.” The concert closed in frequency tradition with “Precious Lord.”

The Valentine’s Day concert was sponsored by the Johnson Center for the Arts and with a great from the Alabama State Council on the Arts.

Wadowicks honored with ‘Leaf of Love’