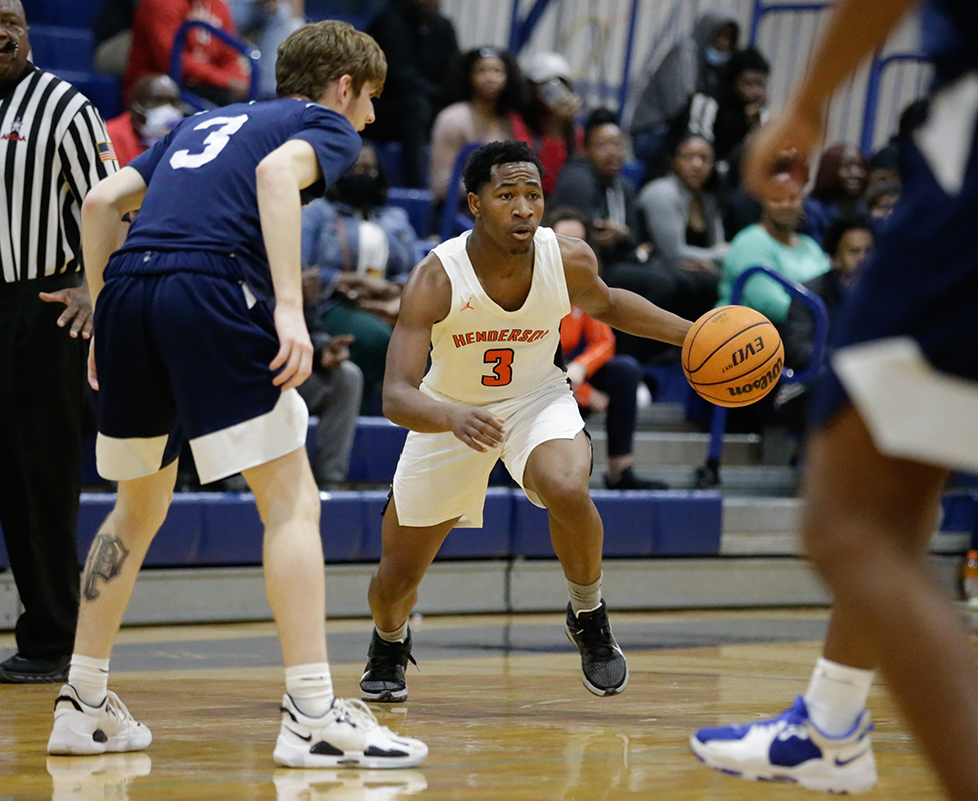 Akeives Shorts of CHHS, 3, works the ball against Headland Tuesday in Troy. (Photo by Dan Smith)

The Charles Henderson Trojans took care of business in the sub-regional round of the Class 5A State Boys Basketball Tournament, knocking off the Headland Rams by a score of 99-64 on Feb. 15.

After a quick Trojan three-pointer, Headland went on an 8-0 run to take an 8-3 lead early in the first quarter. That lead lasted less than a minute as Charles Henderson’s fast-paced offense went on an 8-0 run of its own. Ultimately, the Trojans led 27-21 going into the second quarter and never looked back.

The Trojans didn’t relent in the second quarter, continuing to play full-court press defense along with taking quick shots and keeping the Rams on their heels. Charles Henderson led 54-27 at halftime with the Trojans knocking down 20-of-33 shot attempts in the half.

The second half was just more of the same as the Trojans outscored the Rams 29-15 in the third quarter. Both sides emptied their bench in the fourth quarter and despite a running clock, Charles Henderson’s players attempted to break the 100-point mark for the first time this season before coming up just short.

“I feel like we played well,” Charles Henderson coach Tim Fayson said. “We did what we needed to do and that’s really all that matters. We just have to stay focused and go one game at a time.

“It was great (to play so many players). They deserve it. Those other guys work hard in practice and they deserve that opportunity.”

Charles Henderson now moves on to face Pike Road in the regional round of the Class 5A Tournament. Pike Road is coming off a narrow 78-76 win over Sylacauga in the sub-regional round.

“We have to keep doing what we do,” Fayson said of what he needs to see in the next round. “We have to keep sharing the ball, playing for each other and playing with one another. If we do that, we’ll be alright.”

Charles Henderson and Pike Road play at 10:30 a.m. in the Garrett Coliseum in Montgomery on Feb. 18.