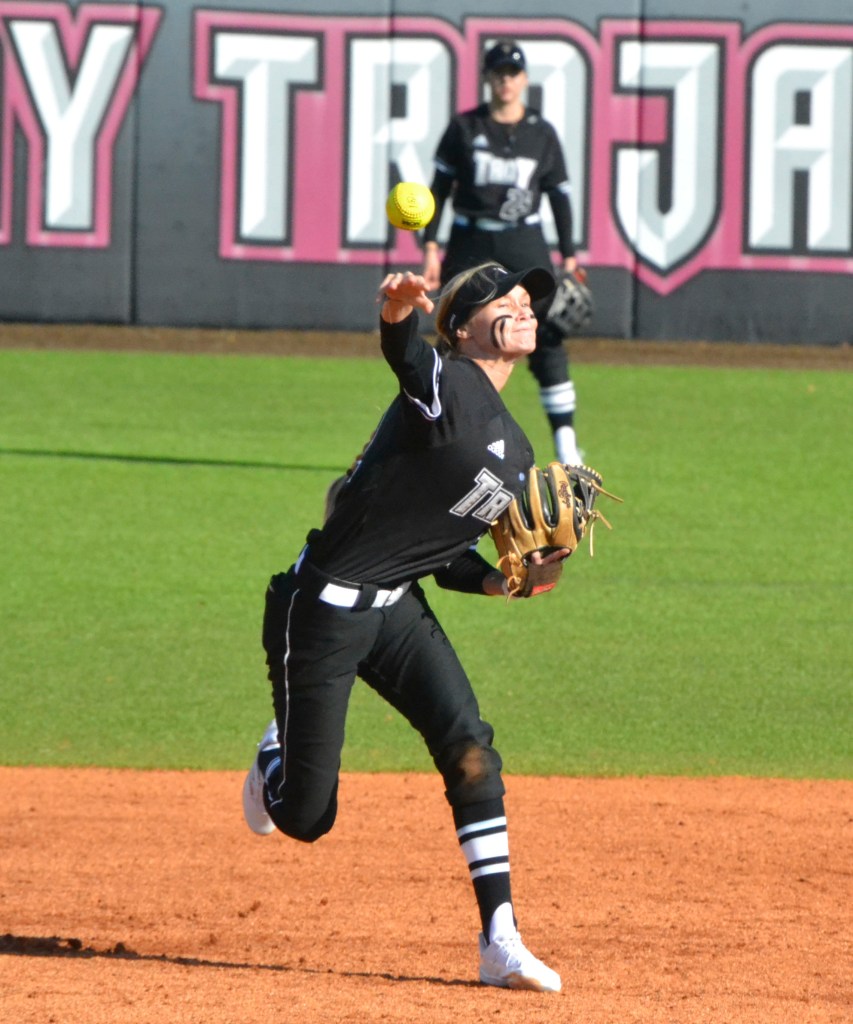 The Troy Trojans softball team opened up the 2022 season with the annual Trojan Classic Feb. 11 through Feb. 12 finishing up 4-1 in the series.

Against Charleston, the two sides battled it out in a dominating pitchers duel. Then, Charleston broke the deadlock with a solo home run in the fourth inning to go up 1-0. Charleston pitcher Carli McCant held a no-hitter until the sixth inning, when the Trojans belted a single and a double before Troy was turned away still with no runs.

For Troy, Brianna Bailey gave up four hits – with one run and a homer – along with two strikeouts, while Brantley native Leanna Johnson struck out nine batters and gave no hits in three innings in the circle.

In the first game against Southern Illinois, the two teams were tied 1-1 when Troy’s Jade Sinness ripped a double in the bottom of the seventh inning to drive home Logan Calhoun and secure the Trojans’ first win of the season. Sinness went 2-for-three at the plate with a run and an RBI. Johnson pitched all seven innings and fanned 11 batters, while giving up just two hits and one run.

The second matchup with Southern Illionois was a home run party. Troy took an early 2-0 run in the first inning when Kelly Horne and Libby Baker both belted solo homers. Southern Illinois’ Jenny Jansen hit a two-run homer in the top of the sixth inning to tie the score 2-2. Siness then came through again for the Trojans as she drilled a home run into left field in the bottom of the sixth. Audra Thompson then drove home Kaylee Chapman to secure the 4-2 win. Horne led Troy at the plate, going 2-for-3 with a home run, an RBI and a run. Johnson pitched all seven innings and mowed down eight batters, while giving just three hits including a two-run homer.

Troy’s follow up was a dominant five-inning effort against Purdue-Fort Wayne with Horne hitting yet another home run. Katelynn de Leon also hit a two-run homer. Siness went 2-for-2 with two runs and Horne went 1-for-2 with a home run, two runs and two RBIs. Taylor McKinney, Anslee Finch, de Leon, Tate Moseley and Calhoun scored one run each. Skipperville’s Libby Baker pitched all five innings with 12 strikeouts, while giving up four hits and just one run. 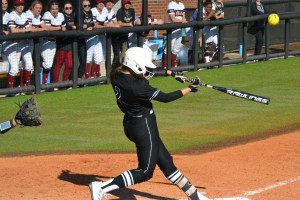 The second round with Purdue-Fort Wayne only went five innings again as the Trojans scored 16 runs and 12 hits on the Sunday game. Siness had another big afternoon going 2-for-3 with two RBIs, three runs and her second home run of the weekend. Horne went 2-for-2 at the plate with two RBIs and three runs. Baker, Calhoun and Candela Figueroa scored two runs each, while Finch, Thompson, Emma Grace Walker and de Leon all scored one run. Bailey pitched two innings and gave up four hits and five runs, while striking out two batters. Baker, Haley Postell and McKinney each pitching one inning. Baker struck out one batter and neither of the three gave up a hit or run.

“I am very proud of how the team handled this weekend,” Troy co-interim head coach Taylor Smartt said. “We bounced back after game one and continued to improve as the weekend went on.

“The resiliency and fight that we showed is a quality that will take us far. Lenna came in and closed out the first game for us and then held Southern Illinois to just three runs in two games. Our relievers came in all weekend and really closed games out for us.”

Troy heads to UAB on Feb. 16 for a doubleheader against UAB before heading back home for the Troy Invitational Feb. 18-20 with Nicholls State, Eastern Kentucky and the SEC’s Ole Miss coming to town. Troy will battle Nicholls at 3 p.m. and Eastern Kentucky at 5:30 p.m. on Feb. 18. On Feb. 19, the Trojans will play Nicholls at 3 p.m. and Ole Miss at 5:30 p.m. before closing out the weekend on Feb. 20 against Troy at 12:30 p.m.