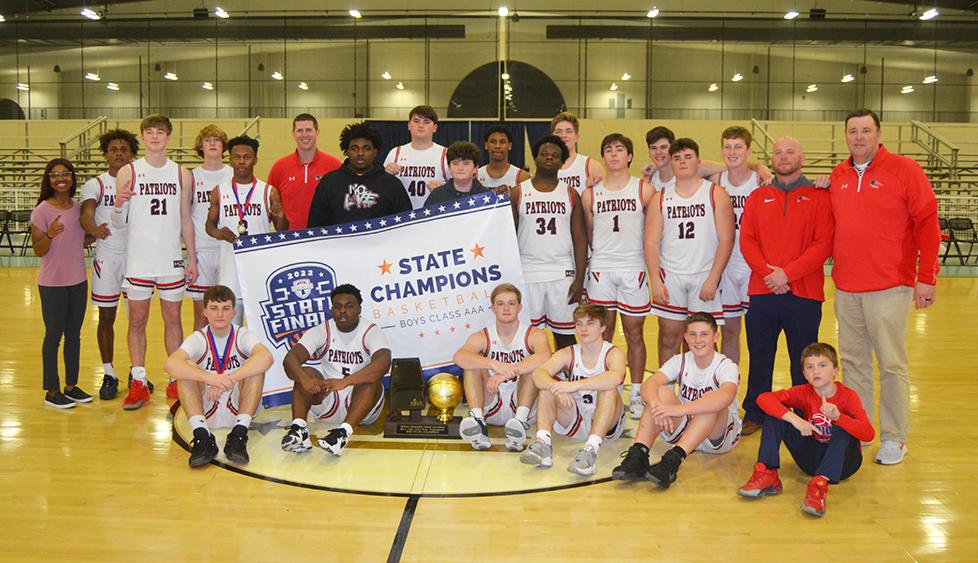 Winning championships has become the norm at Pike Liberal Arts School and that continued on Feb. 14 as the Patriots knocked off Morgan Academy in the AISA Class AAA Boys Basketball State Championship by a score of 91-49.

It was Pike’s second straight basketball state championship and unlike last season, it wasn’t considered an upset.

“We kind of went from being the hunter to being the hunted,” Pike coach Matt Brown said of the difference between last season and this season. “We knew coming into this season we had a really good team and we would have a lot more pressure on us to win it again than there was last year. I hate to say last year was an upset but it kind of was.”

Pike was coming off a Final Four win in which the Patriots were up by 20 points over Tuscaloosa Academy this past weekend before having to fight their way to a three-point win to reach the state title game again. When Pike jumped out to a huge lead over Morgan, however, the Patriots continued to pour it on.

“We wanted to learn a lesson from that game,” Brown said. “Were were up 20 (points) on them early in the game and they came back on us. I told these guys (Morgan) wasn’t going to go away and we had to do what we had to do and not take our foot off their throats and finish this thing out.”

Pike jumped out to a 24-14 lead in the first quarter but completely took over in the second quarter, outscoring Morgan 33-10 in the period to take a resounding 57-24 lead into the halftime break. The Patriots came out on fire in the third quarter, as well, swelling the lead to 81-33 going into the final period. Both teams took their starters out in the fourth quarter as the Patriots secured their second consecutive state title.

“They played great,” Brown said of his team’s performance. “That was a total team effort and exactly what we asked for. It was a good shooting night for us and we did a great job on the boards.”

Junior Austin Cross had a career night scoring 29 points – 20 of those coming in the first half – and grabbing three rebounds with three steals as he earned all-tournament honors. 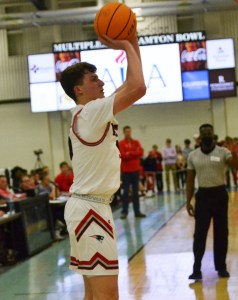 Austin Cross (10) knocks down a three-pointer in the state championship. (Photo by Josh Boutwell)

“He played great,” Brown said of Cross. “Austin struggled a little bit from the three-point line the last couple of games, so we had a talk with him today and said we needed him to show up and be the Austin we had all year long. He answered that bell really quickly. He had a phenomenal game.” 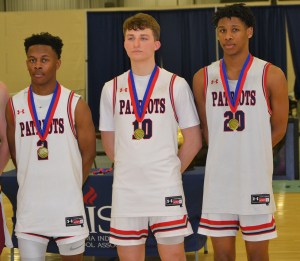 Senior Darryl Lee added 12 points, two assists and two steals as he also earned all-tournament honors. Fellow senior Mario Davenport also earned all-tournament honors and he scored nine points and grabbed nine rebounds in the title game. Junior Ian Foster added 10 points and five rebounds in less than a full half of play as he was ejected in the second quarter due to a pair of technical fouls when the game got a little chippy on both sides. Senior Drew Nelson also scored 12 points and grabbed five rebounds. Morgan was led by Rhyne Williams with 18 points.

As Pike exits the AISA and prepares to enter the AHSAA next season, the Patriots take the momentum of back-to-back state championships with them.

“It’s always good to leave on a high note,” Brown said. “It’s a good accomplishment for our program. A long time ago we said we didn’t just want a good team, we wanted to build a good program. We went to the Elite 8 and then the Final Four and then lost in the championship game and now we’ve won two in a row.”