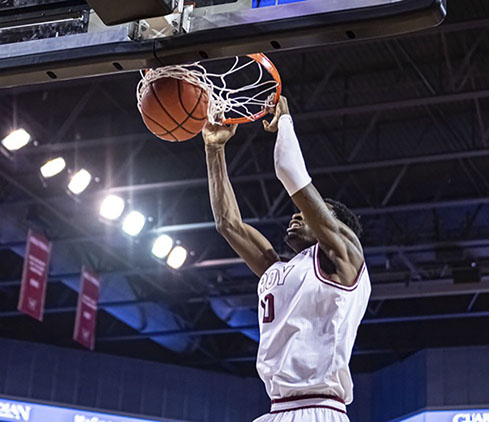 The Troy Trojans (17-7, 8-3) picked up a conference win on Feb. 10 by a score of 79-77 over the Arkansas State Red Wolves at home in a thrilling come-from-behind fashion.

In front of a rowdy Trojan Arena crowd, Troy trailed 59-49 with under 10 minutes remaining. Troy then rallied to go on a 12-4 run, sparked by a slam dunk from Zay Williams, to cut the lead to 63-61. The two sides then battled back and forth trading leads for the remainder of the game with Troy knocking down 2-of-3 shots and forcing three turnovers in the final 30 seconds of the game.

Troy made the late rally despite trailing 35-29 at halftime and losing the rebound battle 33-29. Both teams shot the ball well with Troy hitting 27-of-58 shot attempts and Arkansas State knocking down 27-of-53 shots. Both sides also shot above 35 percent from three-point range.

The Trojans were led by Efe Odigie with 19 points and four rebounds, while Desmond Williams scored 18 points. Duke Deen may have been the biggest difference, however, with 13 points, eight steals, three rebounds and no turnovers.

Arkansas State’s Norchad Omier had a banner night with 31 points and 11 rebounds.

“That was definitely one of the biggest wins of the season,” Troy coach Scott Cross said. “To be down eight or nine points late in the second half.

“Our guys just kept fighting and we got the loose balls. We made the tough man plays in the second half. Like you had guys that were diving on the floor. We were able to get some steals and create some points off turnovers.”

The win pushed Troy even closer to first place of the Sun Belt with five conference games left, including this Saturday against Little Rock before a crucial road game against current first place team Appalachian State on Feb. 17.