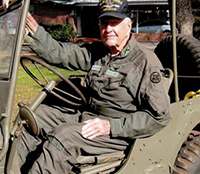 Retired Army Col. Billy Jackson, a lifelong Pike County resident and Troy University graduate, died Jan. 10 at the age of 96. He was the oldest living World War II veteran in the county, and was a veteran of the Korean War, where he flew combat missions. While attending TROY, he was a member of the Wave Men marching band.

He was often seen in his restored WWII-era Willis Army Jeep in parades and around the Troy Campus, especially during football weekends.

“Colonel Jackson was an American hero and a knight of the sky,” said retired Air Force Major General Walter Givhan, Senior Vice Chancellor for Advancement and Economic Development. “He was a master aviator who flew both helicopters and fixed-wing aircraft and served for more than 40 years of active and Reserve duty.”

In 1943, at age 18, he joined the U.S. Army Air Forces and trained as a pilot. He flew twin-engine aircraft in the American Theater during World War II and flew combat missions in the Korean War. Jackson served as an aviation instructor in both aircraft types and was awarded the Master Army Aviator distinction. After Korea, he joined the Alabama National Guard, where he served as commander of an aviation company and battalion, and as Director of the Directorate for Readiness.

He worked for many years at the U.S. Army Aviation Center at Ft. Rucker, Alabama, as a civilian in charge of quality control for academic training. In that capacity he represented Army Aviation at flight simulation conferences in Germany and elsewhere.  He was also selected as Trainer of the Year by the Army Aviation Association of America.

“He exemplified the Trojan Warrior Spirit and was a true gentleman admired by all,” said Givhan, an Air Force pilot and combat veteran himself.

“My father flew under his command in the Alabama National Guard, and I feel fortunate to have gotten to know him and learn from him myself,” he said.

The AFROTC detachment decided to honor Jackson’s service in a way that he’d appreciate – a 0600 hours workout at the Track and Field Complex.

“It was a great opportunity for our cadets to honor a man that served his country honorably and selflessly for many years,” said Space Force Lt. Col. Erin Dunagin, Commander of the Detachment and a professor of aerospace studies at Troy.