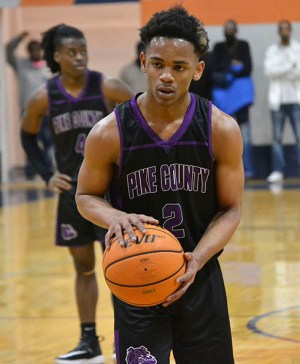 The Pike County Bulldogs saw their 2022 season come to a close in a heartbreaking 66-61 loss to the New Brockton Gamecocks in the semifinals of the Class 3A, Area 4 Boys Basketball Tournament in Opp on Feb. 8.

New Brockton shot 56 percent from the field in the win, while the Bulldogs struggled shooting knocking down just 33 percent of their shots. Pike County narrowly won the rebound battle, however, outrebounding New Brockton 37-35. The Bulldogs also forced 32 turnovers to score 22 points off those turnovers. The Gamecocks won the game beyond the arch in dominant fashion. New Brockton knocked down 10-of-16 three-point attempts, while Pike County managed to hit just one three all night in 12 attempts.

The Gamecocks were led by both Anthony Silar and Matthew Smith with 23 points each. Smith also grabbed eight rebounds. Baylon Foster chipped in with 12 points, six assists, six rebounds and three steals.

In the other Area 4 Semifinal matchup, Goshen fell 83-32 to Opp. Goshen couldn’t keep up with the reigning Area Champs and struggled shooting throughout the game. Opp was led by Jabarri Hill with 21 pints, while Jayden Williams led the way for Goshen with 11 points.

New Brockton will play Opp in the Area Championship on Feb. 11 in Opp.

In the Class 2A, Area 3 tournament Ariton downed Elba 57-32 to advance to the area championship. Ariton was led by junior Isaiah Johnson with 20 points, seven rebounds and three steals. Sophomore Ian Senn had a strong night with 16 points, three steals and three assists. Landon Tyler also chipped in with nine points and 13 rebounds just narrowly missing a double-double.

In the other semifinal matchup, Zion Chapel fell to GW Long in a close 56-51 loss. The Rebels were led by Slade Grantham with 13 points, while Jacob Chestnut scored 11 points and Brady Cobb scored 10 points. Kobie Stringer led Long with 22 points and Avery Roberts scored 16 points.

Zion Chapel finishes the season with a 17-10 record, which is the most wins for a Zion Chapel boys’ team in more than 20 years.

Ariton will meet Long in the Area 3 Championship on Feb. 11 at 6 p.m. in Ariton.

Charles Henderson, who received in a buy in the semifinals, will meet Greenville at home in the Class 5A, Area 4 Championship on Feb. 10 at 6 p.m.