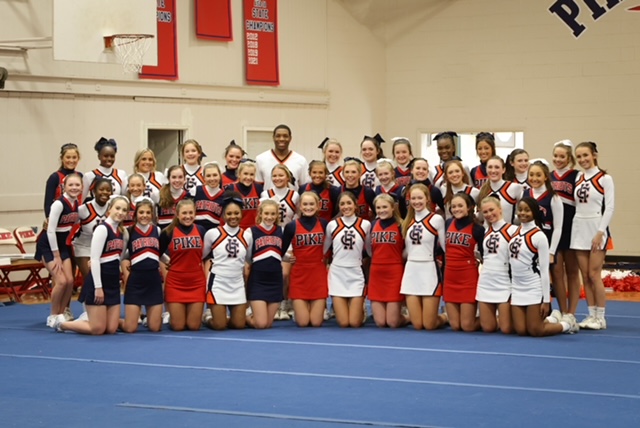 The Pike Liberal Arts junior varsity and varsity cheer squads came together with a showcase with Charles Henderson varsity cheerleaders on Feb. 6. (Photo by Candace Nelson)

For the first time ever three Pike County cheer squads – Charles Henderson High School and both Pike Liberal Arts junior varsity and varsity – will compete at the same time at the UCA National Cheer Competition in Orlando, Fla. this weekend.

Ahead of that competition the squads came together for a special Troy Showcase at Pike Liberal Arts School on Feb. 6.

“I think it went great,” Pike Lib coach Hannah Jordan said. “It’s always good, no mater what the school is, to be able to get in front of different fans you aren’t familiar with and different cheerleaders you don’t cheer in front of and be able to feed off that crowd.

“Being able to do it with our sister hometown school is really special, too. This is the first time Pike County has sent three different squads to nationals. These kids are making history and to be a part of that and doing it together is really an incredible opportunity for them and something special they can treasure forever.”

Charles Henderson coach Alexis Weeks said it was special to have the joint showcase together ahead of the Trojans’ first appearance at the national tournament in nearly a decade.

“It was great,” Weeks said of the showcase. “It was really great for our town to come together.

“We’re very exciting. A lot of these girls and guys back in middle school got to see all those teams go and compete and now they’re seniors and they’ve been dreaming about this their whole lives. This is as big as it gets in high school cheerleading. They’ve worked so hard to get here.”

Pike Lib’s varsity squad is coming off a 2021 National Championship and is looking to repeat.

“We’re excited about going back,” Jordan said. “This is something the past few years that we were so new at we really didn’t know what we were doing.

“We were that squad that was excited but clueless and everything was just that true genuine excitement and everything was so new. Walking on the floor for the first time is a feeling I can’t put into words or try to prepare them for. This year watching our older girls kind of feed into our new girls and how it’s going to be and how exciting it is so hard to describe, but they’ve been there and done it before.”

Despite being national competition veterans, Jordan said she wanted to see her squad continue to have that sense of excitement like it’s their first time again.

“We need that excitement back,” she emphasized. “We rely heavily on our crowd and fans to pull that out of us.

“If you have a good crowd response, that can keep you going. I think that is very similar with other sports. If they’re up and loud and cheering that will keep you motivated. Last year we had comments from the judges and other schools about how awesome our fan base was at nationals. Seeing their reactions and being able to cheer with us, we need that from our crowd, as well.”

Weeks pointed to energy as being key for Charles Henderson, too.

“We have a great routine, we just need to make sure we’re sharp and clean with our motions and take things up thousands of notches with our energy,” she said. “This division we’re competing in is all about energy and spirit and engaging with the crowd and hitting all our stunts and skills and executing everything cleanly.”

The national competition begins on Friday, Feb. 11, with the semifinals taking place Saturday night and the championship taking place on Sunday. The competition will be broadcasted online on Varsity TV.