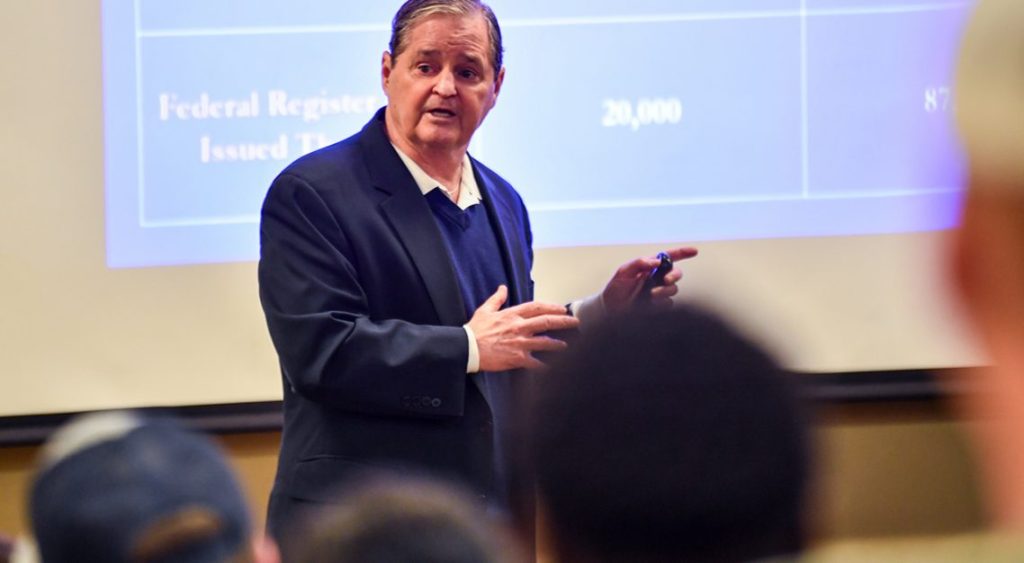 Michael Maibach visited the Sorrell College of Business on January 24 to deliver a lecture titled “Confessions of a Corporate Lobbyist.”

Michael Maibach visited the Sorrell College of Business on January 24 to deliver a lecture titled “Confessions of a Corporate Lobbyist.” The lecture was sponsored by the Manuel H. Johnson for Political Economy.

Maibach, currently a Distinguished Fellow at Save Our States, enjoyed a long career as a corporate executive. He was President of the European-American Business Council from 2003 to 2012 and established Intel Corporation’s Government Affairs Department in 1983. He was Intel’s first Vice President of Global Government Affairs and served in that capacity for 18 years.

Maibach earned degrees from Northern Illinois University, California State University, American University, Georgetown University, Ashland University, and the Institute of World Politics, where he now sits on the Board of Trustees. He serves on numerous non-profit boards, including those of the Witherspoon Institute and the James Wilson Institute, and speaks widely regarding civics education, the Electoral College, business, ethics, and the American Founding.

“For 38 years I represented private companies before public officials,” Maibach told students during his lecture. “I learned that government moves wealth from A to B or X to Y, but that private industry creates wealth. Without private industry, the government couldn’t function.”

Maibach told five stories about his lobbying experience, each of which illustrated a simple moral such as “Ask for help,” “Seek advice,” or “Humble yourself.”

Stephen Miller, who holds the Adams Bibby Chair of Free Enterprise in the Sorrell College of Business and introduced students to Maibach, stated, “Mr. Maibach’s lecture was just what today’s business students needed to hear. He emphasized that business is about building cooperative relationships, not getting the ‘better end’ of a deal.”