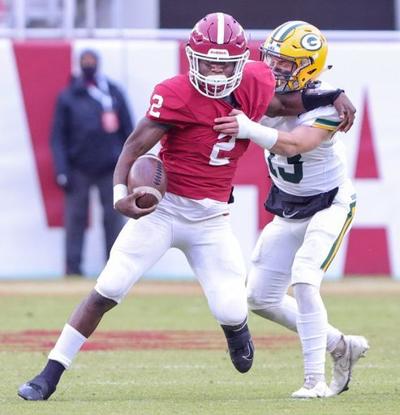 Three star running back Tae Meadows is headed to Troy as a preferred walk-on. (Submitted photo)

The Troy Trojans added a pair of preferred walk ons this week to the football team that will surely turn some heads.

Both Roanoke running back Tae Meadows and Nashville, Tenn. fullback/long snapper Beau Dawson accepted preferred walk on invitations to join the Troy program. Meadows was especially surprising given he had committed previously to Georgia Southern and was rated as a three-star running back by Rivals and 247Sports. Meadows also held other offers from FCS schools like Tennessee, Liberty, Appalachian State, Memphis and Arkansas State.

As a junior in 2020, Meadows rushed for 264 yards and four touchdowns in the Class 4A State Championship as he led Handley High School to the title. Meadows carries some lofty goals into college with him.

“I felt like (Troy) would be a perfect spot for me,” Meadows told The Messenger. “It felt like home and I just love the environment.

“My goals are to lead the Sun Belt in rushing yards and touchdowns and win a championship.”

Dawson is the son of legendary NFL kicker Phil Dawson and played his senior year at Lipscomb Academy in Tennessee. He played both tight end and defensive end and will come to Troy as a fullback and long snapper. Dawson was coached in high school by former Super Bowl winning quarterback Trent Dilfer and his father.

Troy added just one scholarship player to its 2022 signing class, Auburn’s Nasir Pogue, on National Signing Day due to a limited number of available scholarships remaining.

“Due to our scholarship numbers, we simply were not able to bring in a large recruiting class this year,” Troy coach Jon Sumrall said. “However, what we were able to do was bring in a select number of high-quality young men who also happen to be outstanding football players.”