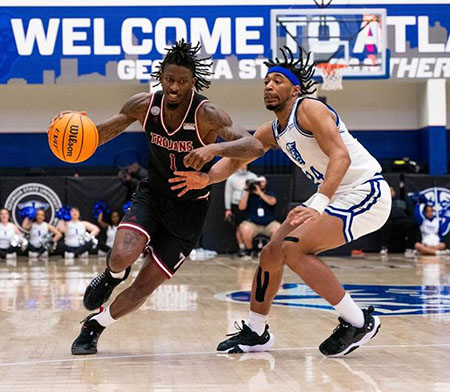 TK Smith (1) and the Trojans picked up a big conference win on Thursday. (Photo courtesy of Troy University Athletics)

The win is Troy’s fifth in the last seven games and puts the Trojans in second place in the conference behind Appalachian State.

After trailing early, Troy began to pull away late in the first half stretching a lead out to as many as 12 points. The Panthers continued to claw their way back into the game, however, and knocked down a three at the buzzer to cut the Troy lead down to 34-26 at the break.

Georgia State continued to chip away at the lead in the second half but every time it seemed the Panthers would look to gain the advantage Troy would stretch the lead out again.

Then, with less than six minutes remaining, and the Trojans leading 54-53, Troy’s Rifen Miguel was ejected for a flagrant two technical foul. The Panthers knocked down 1-of-2 free throw attempts to tie the score at 54-54 with 5:28 left.

Georgia State hit a jumper just a few moments later to take its first lead since early in the first half 56-54. The two sides continued to slug it out with Troy taking a three-point lead with just 50 seconds left causing the game to become a free throw battle.

“Our guys did an unbelievable job playing great defense,” Troy coach Scott Cross said. “We made it an ugly game. We made it a rock fight.

“To hold them to 33 percent (shooting) with a great basketball team, you know, Georgia State is one of the better teams in the league based on their preseason polls putting them at the top of the league and our guys defended them for 40 straight minutes. We turned the ball over too many times but other than that, I thought we played really good basketball.”

Troy dominated the glass throughout the game, outrebounding Georgia State 45-36, and shot 40 percent from the field compared to the Panthers’ 33 percent shooting.

Odigie led the Trojans with 17 points and 11 rebounds, while both Kieffer Punter and TK Smith scored 12 points each. Williams chipped in with eight points and eight rebounds, as well.

Troy will remain in Georgia this Saturday, Feb. 5, against Georgia Southern at 3 p.m. The Lady Trojans will also host rival South Alabama this Saturday at 4 p.m. in Trojan Arena.