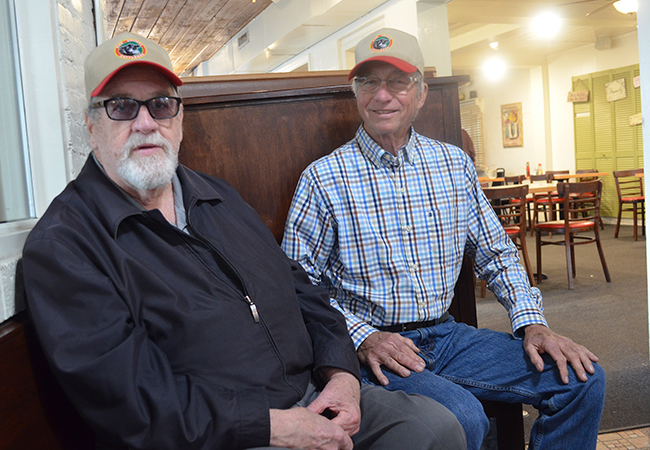 James Ketchum is a cowboy at heart.

He grew up watching shoot-‘em-ups at the “picture show” and then playing-the script out with his cowboy friends.

“Back when I was growing up, we all went to see cowboy and Indian movies,” Ketchum said. “Roy Rodgers was my favorite cowboy. I had a Roy Rodgers cap pistol, the kind that shot paper caps. I liked everything about the Old West even though I had never been there.”

Palmer is serving a two-year term as president of the Will James Society and is also a past president and longtime member.

To him Will James is the All- American hero of the Old West.

“Will James was an artist and writer of the American West,” Palmer said. “To me, he is the Old West.  And, what is most interesting is that he was a Canadian who learned to be a cowboy. To me, and to many others, his Old West artwork is better than that of either Charles Russell or Fredrick Remington. Nobody could or can paint a horse like Will James.”

“I joined the Will James Society because B.B. asked me to,” Ketchum said. “The purpose of the society is to let others know about Will James and his books and artwork that keeps the Old West alive. I wanted to see the Old West that Will James wrote about and what the country that he painted really looked like.”

And, Ketchum was not disappointed.

“The American West was like I thought it would be from the Western movies and from Will James’ books and pictures,” Ketchum said. “The vastness of the land; the openness of it. You can drive forever and not see a house. It was even more than I thought it would be. I could not even think what the Black Hills would be like. I was surprised that the thickness of the Ponderosa pines on the mountains gave them that black look.  There was so much to learn.”

For Palmer, the winter meeting of the Will James Society was his 13th trip to the Western United States. Even after all those times, Palmer was just as intrigued as his friend was on his first trip.

“For me, seeing the American West through James’ eyes was like seeing it all for the first time,” Palmer said. “Both of us enjoyed the museums but there is nothing like the natural beauty of the land.”

Although Ketchum said, more than likely, he will never see Stonehenge or the Great Pyramids, he has seen the wonders of the West.

“The natural wonder of the land was amazing and the Mount Rushmore National Memorial and Crazy Horse are unbelievable. That man can carve images like that on mountains is more than I can imagine. Even now that I’ve seen it and it’s still hard to believe.”

Mount Rushmore in the Black Hills of South Dakota was completed in 1941.

“It’s about 60 feet high and has the faces of four of our presidents, George Washington, Thomas Jefferson, Theodore Roosevelt and Abraham Lincoln carved in granite,” Ketchum said. “It’s hard to believe even when you see it.”

The Crazy Horse Memorial, in the Black Hills of South Dakota, is still under construction and it is the world’s largest mountain carving.

It’s considered the Eighth Wonder of the World in progress.

Palmer said “Crazy Horse” is under construction on privately held land. It will depict the Oglala Lakota warrior, Crazy Horse, riding a horse and pointing to his tribal land below.

The head is the only finished part of the sculpture. At 87 feet high, it exceeds that of each U.S. Presidents head at Mount Rushmore by 27 feet.

Palmer, a seasoned Westerner, and Ketchum, a greenhorn of sorts, said the American West, as Will James saw and preserved it through his books and his artwork, is gone.

But there is nothing to compare with the American West, they said.

“I would not take anything for going,” Ketchum said. “I thank B.B. for inviting me and for making it a great Western adventure that I will always remember.”