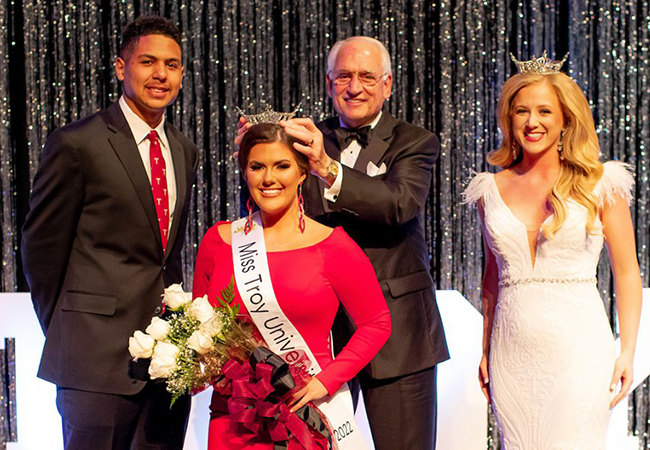 Caroline Alexis Clark, a senior English major from Ozark, was crowned Miss Troy University 2022 during the 49th annual pageant on Saturday at the Troy Campus.

As Miss Troy, Clark will serve as an ambassador for the University and will compete for the title of Miss Alabama in July.

“I am honored and blessed to have the privilege of representing Troy University,” Clark said. “Not only do I get to represent the school I love, it gives me the opportunity to raise awareness and support for victims of violence.”

Clark plans to advocate for change within the justice system through her social impact platform is “Balancing the Scales: A Voice for Victims.”

“Majoring in English with a minor in Criminal Justice, I realized just how unbalanced the scales can often be in the justice system,” Clark said. “To me the only way to implement change is through advocacy. My ultimate goal is to become an attorney so that I may advocate on a daily basis for those who have been a victim of violence.”

Contestants were judged on a private interview, an on-stage question and social impact pitch, talent, and red carpet.