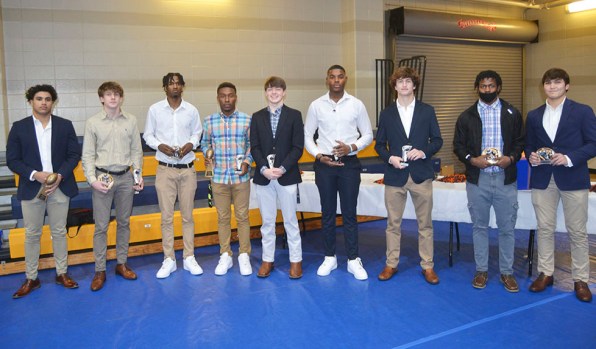 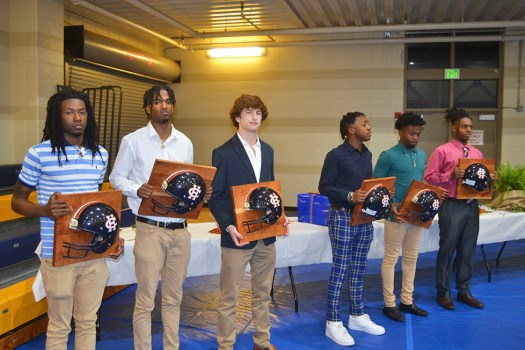 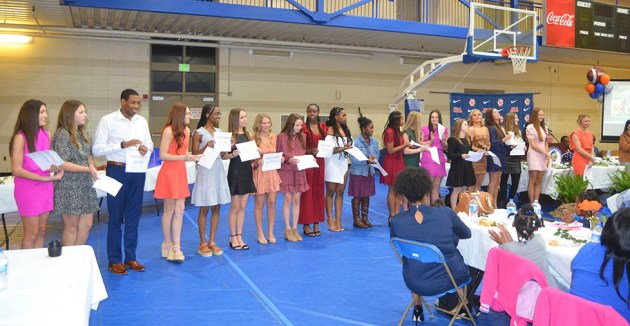 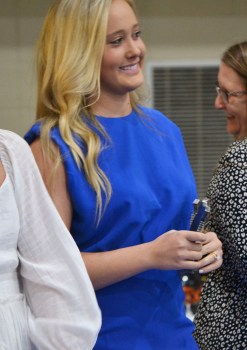 Madison Stewart won both the Best Offensive Player and MVP Award for the volleyball squad. 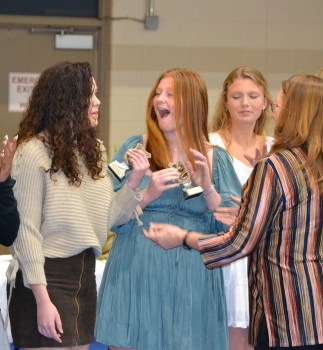 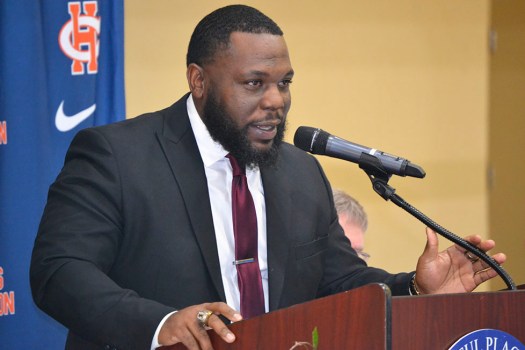 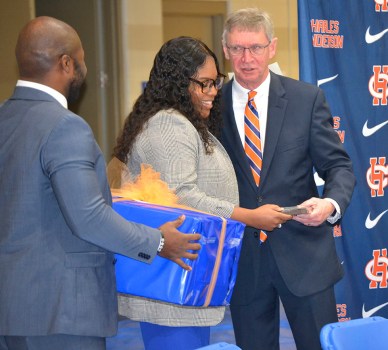 Troy Parks and Rec Director Dan Smith is presented with a plaque and gift from CHHS.

While the night was all about celebrating the Trojan athletes, before that celebration began the athletes also got a chance to hear from a college football coach. Alabama State running backs coach James Thompson delivered a message of encouragement to the athletes in attendance.

Thompson is the former head coach of both Pickens County – where he won a pair of state titles – and Carver High School in Montgomery. He’s been coaching at Alabama State, where he played college football, since 2020.

Thompson’s message to Charles Henderson’s athletes centered around controlling the controllable. Thompson said that when a person dies everyone has the date of birth, a dash and a date of death on their tombstones. He said you can’t control those dates but the dash in the middle is what you can control. He said that the “DASH” should stand for discipline, attitude, sacrifice and habits.

“Controlling what you can control is very important,” Thompson said. “Everyone wants to be able to run a 4.2 (40-yard dash) and be big and strong to be a great athlete, but if you can’t display these characteristics it will be hard to be successful.”

Thompson said that having those characteristics may not allow someone to do anything but it will help them do everything better.

“If you’re disciplined, have a positive attitude, sacrifice for what you want and develop good habits, that is four things that don’t require any athletic ability at all,” he emphasized. “You can be the biggest, fastest and most popular person in school but if you don’t have those characteristics I guarantee you won’t get that far.”

Charles Henderson cheer coach Alexis Weeks honored her entire team and pointed out that they will be competing in a national competition next week.

The volleyball squad also honored their athletes with an awards presentation. Madison Stewart won both Best Offensive Player and Most Valuable Player after earning 277 kills, 2.5 blocks, 57 aces and 142 digs during the 2021 season. Kelci Hicks was named Best Defensive Player after tallying 153 digs with a 77 percent dig percentage. Both Bess Dunn and Emma Burttram earned the Most Improved Award.

Cody Youngblood captured the Best Newcomer Award, while Brandon Givens earned Most Improved. All-state kicker Nik Peerson earned both the Academic Award and Special Teams Award. The Demario Harris Jr. Character Award is presented to the player that shows the highest character on the team and Will Templin was presented with it.

Boyd also earned Offensive MVP and Damien Hart earned Defensive MVP. Each senior was also presented a plaque with their helmet on it.

At the end of the banquet, longtime Troy Parks and Recreation Director Dan Smith was presented with a gift and a plaque for his dedication and support of Charles Henderson Athletics.