On the dotted line: Pair of Patriots sign with colleges 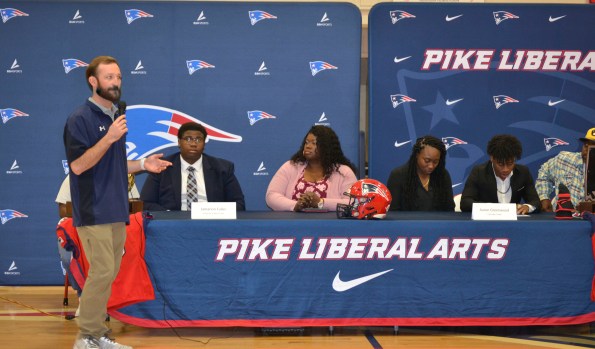 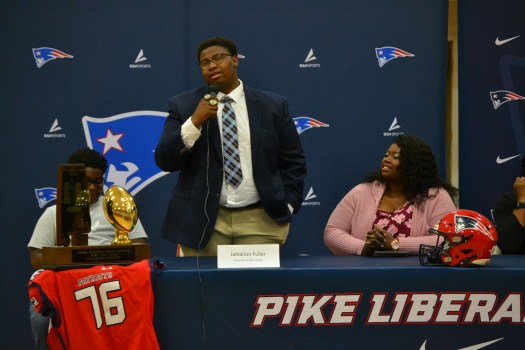 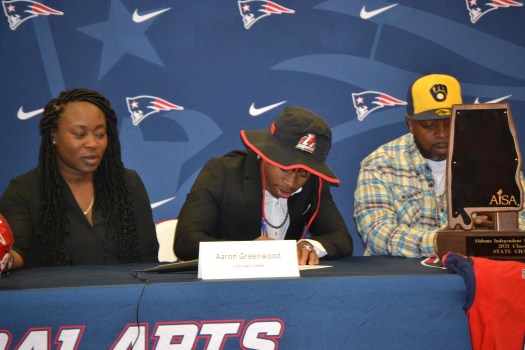 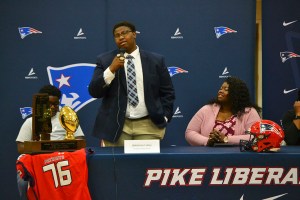 “With the work these guys have done and the sacrifices they’ve put in, to be sitting up here is not something to be taken lightly,” Pike Lib coach Rush Hixon said. “It takes a lot of time, a lot of effort and a lot of sacrifice from family, friends and themselves.

“Both of these guys played a huge role on two state championship teams here but they’re also just really, really special people. They’re special athletes but the type of people they are is what will allow them to go on and be successful in college and in life.”

Fuller, who played on both the offensive and defensive line at Pike Lib, said the impression the coaching staff and West Florida’s campus made on him was a big factor on his decision.

“It’s a great school, a great campus and the coaching staff is amazing,” Fuller said. “They just made me feel like home. They invited me in and took care of me and made sure I knew everything I needed to know. It was a great experience on the visit. So, I thought where else could I go that would be better?”

Fuller said his coaches and teammates at Pike Lib have helped him grow as a player.

“They mean a lot to me,” he said. “They all helped me grow and they all helped me get through tough times and trials and tribulations. I’m thankful for all my teammates and the coaching staff and every single person that has been a part of this team.”

Fuller, who plans to study electrical engineering, said his goals for the field are very simple.

“I want to help them win another (national championship),” he flatly said. “That’s the goal.” 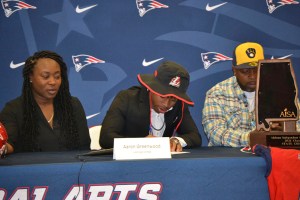 Greenwood said that LaGrange also felt like home to him, as well.

“It was a small college but it felt like home,” he said. “They have small classes, so I can be really close with my professors and make sure I’m doing everything right in the classroom.”

Like Fuller, Greenwood said his teammates and coaches at Pike Lib have meant everything to him.

“They’ve meant the world to me,” Greenwood said. “Ever since I got here they’ve completely changed my life. They showed me I can make it.”

Greenwood said he’ll be as versatile at LaGrange as he was in high school, playing running back, slot receiver and returning kicks. His goals for college are also simple.

“I want to go and make all-state on the field and also want to earn my degree in the medical field,” Greenwood emphasized.