CHHS picks up pair of wins at Luverne 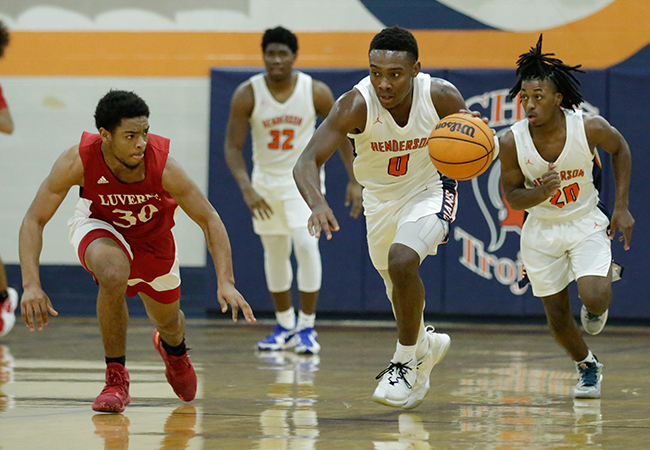 The Lady Trojans of Charles Henderson High got revenge from an overtime loss in Luverne earlier this season, while the varsity boys of CHHS emptied their bench in a win over the visiting Tigers Tuesday night in Troy.

Trailing by three points early in the fourth quarter, the Lady Trojans relied on their defense to retake the lead en route to a 48-45 victory over the Lady Tigers, while the boys rolled to a 62-40 win over Luverne.

“It was most definitely our defense that got us back in the game,” said CHHS Lady Trojan Head Coach Dyneshia Jones Elder. “We have a strong group of girls that understand the defense really well, so sometimes it does not always set up the way we want to, but they know how to adjust to it well. 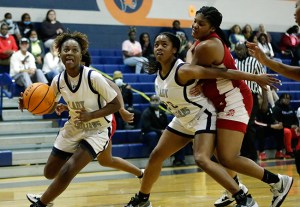 Raven Williams of CHHS, 12, drives to the basket against Luverne Tuesday night in Troy.

The Lady Trojans have one regular season game remaining, this Friday in Troy against Pike County High School.

The Lady Trojans were led in scoring by Madison Ousley with 15 points, Raven Williams with 14, Mileah Ward with 10 and K.K. Hobdy with nine points,

In the second game the boys varsity played everyone to improve to 20-5 on the season, in taking the 62-40 win.

It was a good chance to get everybody in to play,” said CHHS Head Coach Tim Fayson. “The kids have been working hard, and it was good to get some reserves in there and give them a chance to play.

“We are where we want to be. We have had a top-heavy schedule, as we played a lot of tough teams. We have played the number one team in the state three times this season. That experience is going to help us out down the stretch.”

The Class 5A Area 4 tournament begins next week, with the boys playing Monday’s winner of Andalusia and Greenville. That game will be next Thursday at 6 p.m. in Troy.

The Lady Trojans play Monday at 6 p.m. against Andalusia in Troy.