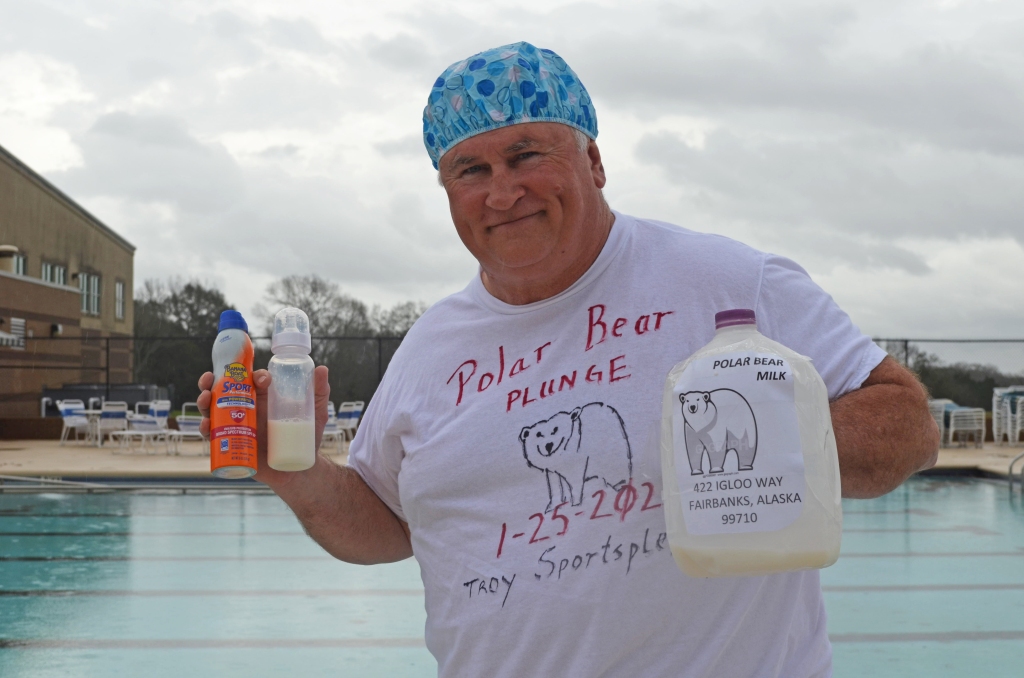 Forrest Lee helped create the Polar Bear Plunge for Habitat for Humanity and still takes the plunge every year.

Never let the truth get in the way of a good story.

Forrest Lee is a subscriber to that “directive.”

And, possibly, out of Lee’s ability to tell a good story, came the idea for the Polar Bear Plunge.

Lee said, about three years ago, he, Dianna Lee and Beth Stubblefield were exercising for minor, but nagging, ailments in the heated indoor swimming pool the Troy Recreation Park.

“We were talking about Pike Habitat for Humanity and what a good cause it is,” Lee said, adding their pool talk turned to the interest in Polar Bear Plunges and what good fundraisers they seemed to be.

He relayed how, when he was about six months old, his family moved from the hinterlands of warm, sunny Georgia to icy, cold Alaska. Because cows didn’t find America’s Last Frontier suiting, his baby bottle was filled with polar bear milk.

As the story unfolded, a light went off in the minds of the man, with polar bear milk running through his veins, and his warm-water friends. A Polar Bear Plunge would be an ideal fundraiser for Pike County Habitat for Humanity.

Knowing the people of Pike County are always supportive of charitable fundraisers and college students are up for most anything, the trio decided, “Let’s do it.”

That was three years ago.

On Saturday, 70-plus plungers, most of whom were Troy University students, plunged into the 40-something degree water at the Troy Recreation Center’s outdoor pool and “came up” with $10,750 in donations and sponsorship funds in support of Pike Habitat for Humanity.

Lee, took the plunge for the second time in the fundraisers three-year history. He went in slowly – big toe, flat foot, ankle – in and in until his head went under and his cowboy hat floated away.

“Nobody else did it that way, but, for me, easing in was better than jumping in all at once,” Lee said, laughing. “Either way, the water is icy cold and will take your breath away.”

Dianna Lee expressed appreciation to all those who participated in the Polar Bear Plunge.

“The funds raised will make it possible for a family here in Pike County to have a home of their own,” she said. “Pike County Habitat for Humanity does so much good for those in need and what they do does not go unnoticed.”