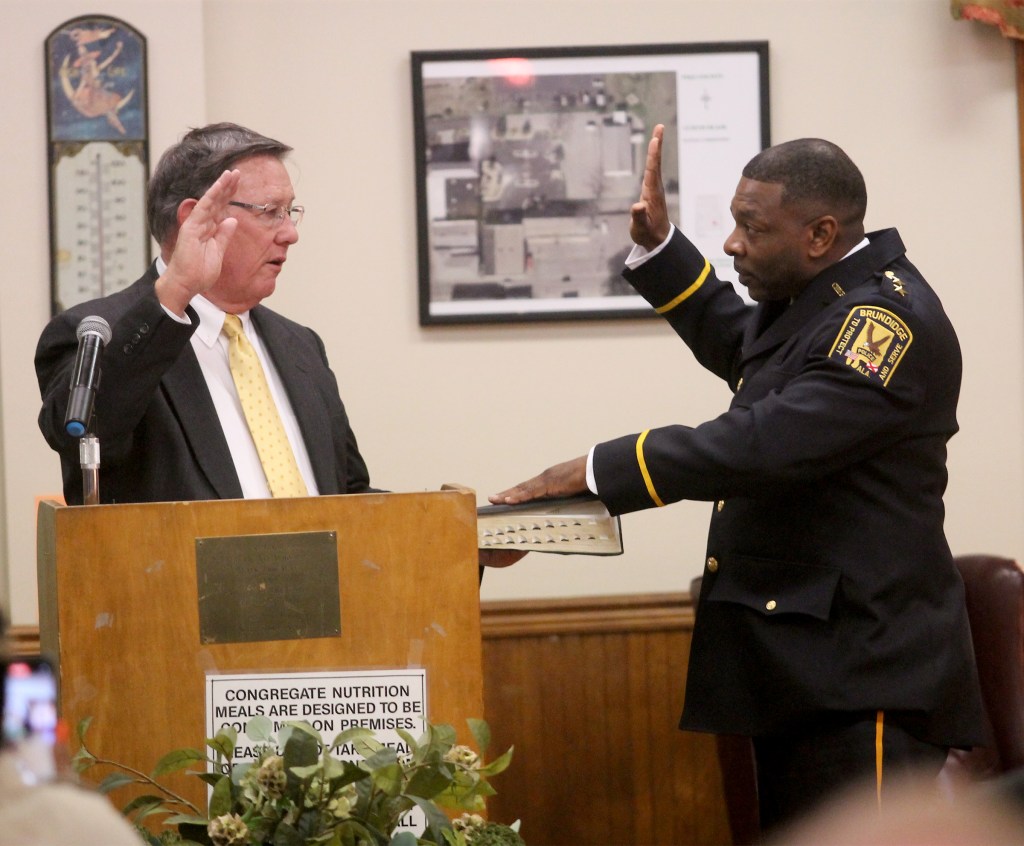 Sam Green was sworn in as the new chief of the Brundidge Police Department on Friday.

The City of Brundidge  held a special swearing in ceremony and reception at Brundidge Station. The room was packed with friends, family, government officials and representatives from various area law enforcement agencies.

“I want to thank everybody that came,” Green said after being sworn in. “It’s  a blessing to stand here today … I also want to thank the officers at the BPD. Sometimes they don’t get enough credit for what they do.”

Green’s career in law enforcement has spanned more than 24 years. Green graduated from Goshen High School and then received a degree in computer and information science from J.P. Tech and a bachelor’s degree in criminal justice from Troy State University. Green said he is currently pursuing a master’s degree in homeland security from Auburn University at Montgomery and has a few classes left before graduation.

His first job in law enforcement was with the Pike County Sheriff’s Office as a deputy sheriff. He then served as a parole officer for the state before becoming an officer with the Montgomery Police Department.

Green said about four years ago, he returned to Pike County as an officer in the Brundidge Police Department. Green said he worked his way up through the ranks and was promoted to sergeant, lieutenant and investigator in the department before being formally appointed as chief last week.

Green said he was thankful so many people were able to attend his swearing in ceremony. He said he was also happy his family – his parents, Sam and Angeline Green, and his wife, Sharon, and children, Jacobi and Tamiya – were able to share in the moment with him.

He shared a story of his first day on the job in law enforcement with the Pike County Sheriff’s Office.

He said his training officer, Sam Mallory, took him on a call to bring in an arson suspect for questioning. Green said a fight broke out and he pulled out his mace to subdue the suspect. But, instead of subduing the suspect he sprayed Mallory in the face by accident.

“We got back to the sheriff’s office and I was scared and tired,” Green said. “I saw Sheriff Russell Thomas and I asked, “Is everyday going to be like this? It wasn’t and I’m glad I stayed.

“When I got into law enforcement, it was for a job and a career. As time went on it turned into a passion. It’s a rough, dangerous job because not everybody has your best interest at heart. But, if you put the Lord first and stay prayed up, everything will be OK.”