Troy gets revenge with win over USA 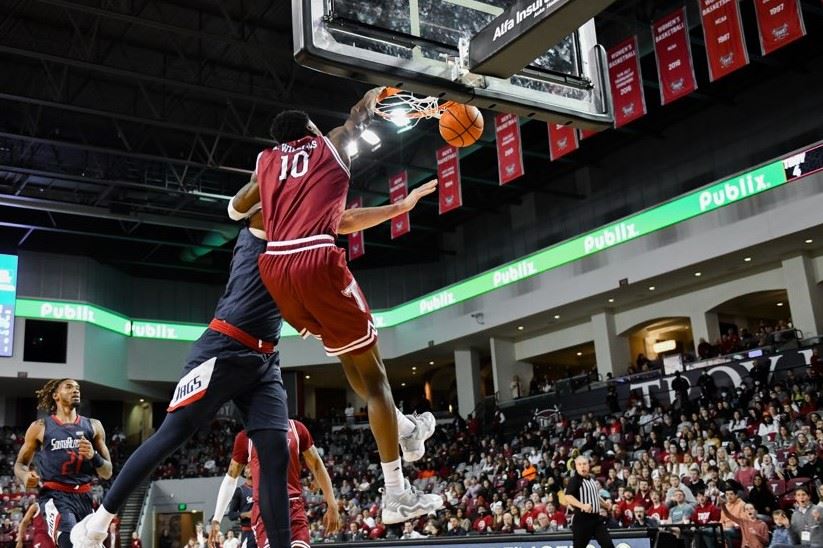 Troy University Troy’s Zay Williams finishes off a dunk against South Alabama on Saturday night. Williams scored 13 points against the Jaguars and was one of four Trojans to score in double digits.

In front of the largest home crowd in the Sun Belt this year and third largest in Trojan Arena history, Troy exacted its revenge on in-state rival South Alabama with a 77-68 victory Saturday night in Trojan Arena.

Troy (14-7, 5-3 Sun Belt) drained eight 3-pointers, six in the second half, to avenge a 19-point at the hands of the Jags (15-6, 5-3) on Thursday in Mobile. The win, which came in front of 4,546 fans, snapped a seven-game winning streak by South Alabama in the series and put the two rivals in a tie for third in the league standings.

Duke Miles scored a season-high 22 points on 5-of-10 from the field to lead the Trojans and was one of four players to score in double-figures – Zay Williams – 13, Efe Odigie -12, Kieffer Punter – 12).

Odigie finished with his second double-double on the season with 15 rebounds, while Punter scored 10 of his 12 points in the second half, while Miles dropped in 12 points after the break.

The Jaguars had two 20-points scorers in Charles Manning Jr. and Jay Jay Chandler, while Javon Franklin also got involved with 13 points and 11 rebounds.

Troy dominated South Alabama on the glass holding a 44-28 advantage in rebounds, including a 17-8 advantage on the offensive glass. The Trojans took advantage of their second chances with 22 points on their extra possessions, while Troy’s bench outscored South Alabama’s by a 21-7 margin.

South Alabama took its largest lead of the game at the 10:25 mark in the opening half on a Manning Jr. free throw. Troy followed with a 12-1 over the next five minutes to take a seven-point lead, 20-13. The run consisted of eight points from Miles, including two shots from behind the arc.

The Trojans went to the break with a 31-22 lead despite struggling to find the bottom of the net, shooting just 28.1 percent in the half. However, Troy excelled at the free throw line in the opening period connecting on 11-of-14 while South Alabama shot just 28.6 percent from the floor and 53.3 percent from the charity stripe.

Too Much to Handle

Zay Williams set the tone for the remainder of the game less than a minute into the first half draining a clutch 3-pointer following an offensive rebound by Odigie.

Feeding off the near-record crowd in Trojan Arena, Troy went on a 17-5 run over a five-minute stretch capped by back-to-back deep 3-pointers from Desmond Williams, two of three in the game from Troy’s sophomore sharp-shooter.

The Trojans connected on 12-of-15 from the free throw line over the closing three minutes of the game to thwart any hopes that Jags had at making a comeback.

“The fans really lifted us up. They gave us a ton of energy on defense. They’ve made a huge difference for us. And I’m so proud of our guys. I told them before the game we faced a lot of adversity. In our last game, we got beat pretty handily. Adversity reveals character, and our guys have responded over and over this season. And they did it again today in the biggest fashion.

“Duke Miles was phenomenal. I mean, we knew Duke has this in him. He’s one of the best players in the conference. Zay did a great job on the boards. That first dunk he had the beginning of the first half, I think, really set the tone, and it was a huge momentum builder. Super, super talented. He can score inside and outside. He’s a great rebounder great defender who does just about everything. Desmond is one of the toughest guys on our basketball team. He’s going to be a tough guy. He’s going to block bigger guys out. Desmond [Williams] has been so good for us all year long. I was just like, we got to go with them our backs against the wall. I need a guy to go out there that I know is going to defend, and Dez is that guy.”

• Duke Miles scored 22 points on the night for his fourth double-digit game of the season.

• Desmond Williams ended a three-game scoring drought in the second half when he knocked down a three with 16:06 remaining – he finished with nine points.

• The Trojans dominated the boards tonight, outrebounding the Jaguars 44-28 – Troy’s most rebounds since UTA (53) on Jan. 1.

• Duke Miles had 22 points tonight, marking a new season-high – his previous was 16 against Florida Atlantic on Nov. 22.

The Trojans will hit the road once again for a double-dip in Georgia starting next Thursday at Georgia State. The game is set to begin at 6 p.m. in GSU Sports Arena.