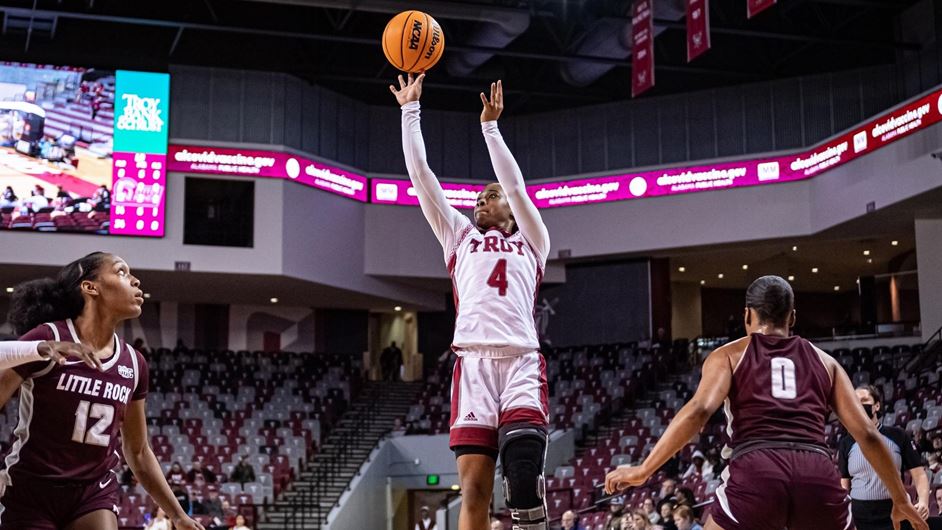 Troy University Troy’s Jasmine Robinson had a double-double and went 8-for-8 at the free throw line.

After Robinson knocked down the first jumper of the afternoon, the Trojans ignited on an early hot streak, leading 8-0 through the first 6:28 of the contest. Alyssa Phillip gave Georgia State its first points of the game with an and-one, but Troy answered with back-to-back buckets, 12-3, with 3:48 to go. However, the Panthers refused to back down, closing the quarter out on a 10-2 stretch and cutting their deficit to one, 14-13, at the end of the first period.

Troy yet again opened the quarter on a 5-0 run with all five points coming from Robin-son before the Panthers caught momentum and began to trade makes until the 4:28 mark. With Troy leading 27-19, a 6-0 Panther stretch cut the deficit back down to two with 1:55 to go. However, back-to-back buckets from Troy forwards Tina Ste-phens and Brianna Harris sent the Trojans into the break with a 31-25 lead.

The back-and-forth battle continued into the second half as Georgia State closed the gap, taking a 40-38 lead at the 4:50 mark thanks to a three-pointer from Deasia Merrill. The Trojans utilized a pair of trips to the charity stripe to regain a two-point advantage, but Georgia State evened the score, 47-47, with a layup heading into the final 10 minutes of action.

With just a combined four points scored until midway through the fourth quarter, Harris gave Troy a crucial two-point lead with 4:44 to play. A jumper from Amber Leggett and a pair of free throws from Robinson gave Troy an insurmountable six-point advantage, setting up the eventual 60-56 final.

• Jhileiya Dunlap finished the game with four blocks, good for her 12th game this season with three or more blocks.

• Troy outrebounded Georgia State, 45-43. The Trojans improve to 9-3 when outrebounding their opponent.

• Jasmine Robinson finished the game a perfect 8-for-8 from the free throw line.

After taking Thursday off, Troy heads back home to take on rival South Alabama on Saturday. Tipoff from Trojan Arena is set for 4 p.m.