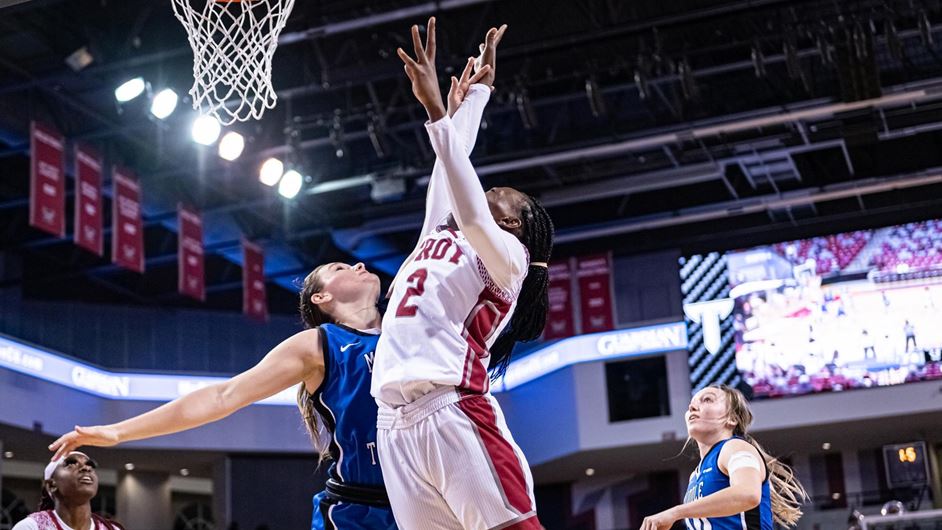 Troy University Felmas Koranga finished the game in double figures with 15 points and 11 rebounds, good for her ninth double-double of the season.

Despite Tina Stephens draining the first shot of the contest, Georgia Southern quickly saw themselves up 6-2 just two minutes into the opening period. Jasmine Robinson sank a triple to start a toe-to-toe battle that spanned all the way to the 2:18 mark. With the Eagles leading 14-13, the Trojans strung together an 8-0 run to end the quarter and give Troy a 22-14 lead.

Troy’s momentum carried into the second quarter, picking up a 13-point advantage off a pair of makes by Felmas Koranga from the charity stripe with 5:08 to play. However, Georgia Southern began to edge away at the Trojan lead until a 5-0 run at the end of the quarter cut the Eagles’ deficit to six, 44-38, at the half.

Much like the Trojans to open the second, Georgia Southern’s momentum carried into the opening minutes of the third quarter, where the Eagles cut their deficit to just one, 49-48, thanks to a second-chance layup from Taya Gibson. Sparked by a layup from Jhileiya Dunlap, Troy utilized a 6-2 run to regain a seven-point lead, but a pair of Eagle makes from the free throw line sent Troy into the fourth quarter with a 61-56 advantage.

After a slow start the fourth quarter with just five points scored from either side, Georgia Southern’s Terren Ward kickstarted the back-and-forth buckets. A 6-2 Trojan stretch gave Troy a 67-61 lead, but Georgia Southern clawed back to tie the game 67-67. After an Amber Leggett layup, Georgia Southern took a one-point lead after a triple from Mya Burns, but Tiyah Johnson immediately answered with a layup to regain the lead. With under a minute, the Eagles were forced to foul, leading to an insurmountable six-point advantage for the Trojans.

“We didn’t play super well tonight, so we are fortunate to get the win on the road over a good Georgia Southern team. As usual, our Trojan effort was relentless. It is great that we can always count on that to help us get the win.”

Felmas Koranga finished the game in double figures with 15 points and 11 rebounds, good for her ninth double-double of the season.

Tina Stephens also finished the game in double-digits with 13 points.

Despite leading the nation in rebounding, the Eagles outrebounded the Trojans 59-47. However, Troy improves 6-5 when being outrebounded.

Troy travels to Atlanta to square off against Georgia State Saturday. Tipoff is set for 1 p.m. from GSU Sports Arena.