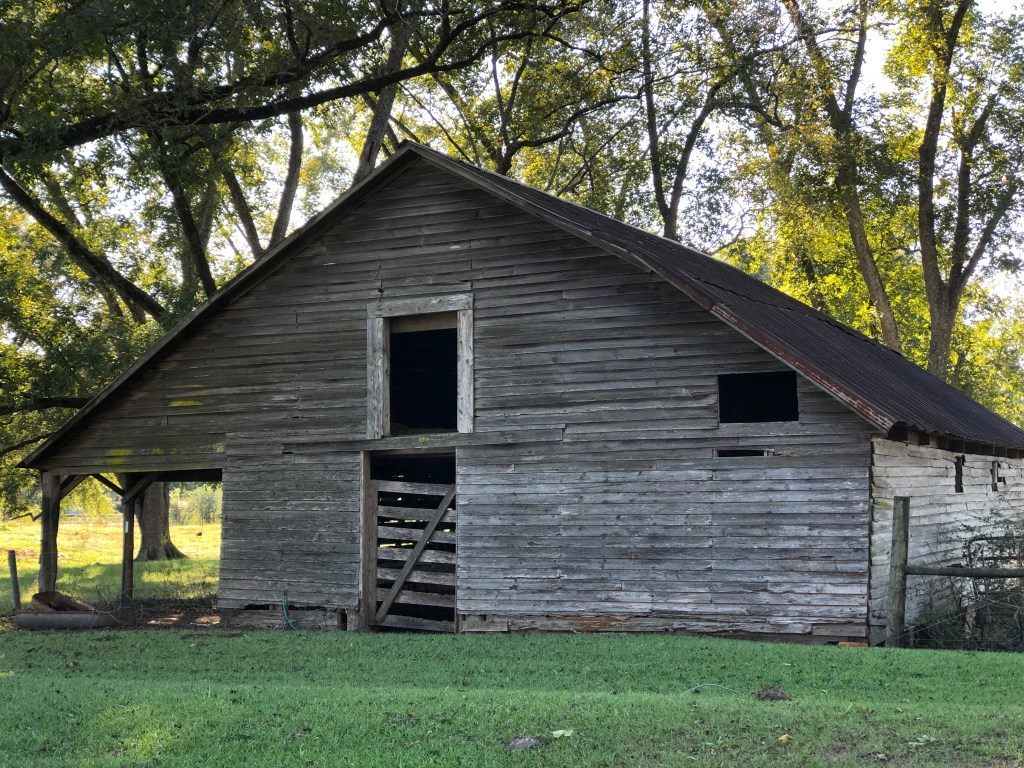 Photos by Deborah Huggins-Davis The Pike County Farm City Committee is photographically preserving the old barns scattered across Pike County. Deborah Huggins-Davis took on the project for the committee. Pictured are (above) the Kyzer family barn, (below, from top) A.D. Ryals Barn now owned by Ms. Ruby Ryals, William Huggins Barn built in late 1930s and the Bill Dunn Barn.

Forgotten places, and abandoned structures are fodder for the camera bug.

When Alabama photographer Glenn Wills was the featured exhibitor at the Johnson Center for the Arts, his amazing photographs caused viewers to begin taking a closer look at places and things that time had forgotten —to take more than a casual look at things and places that had been robbed by time.

But, even before these professional photographers shed light and darkness on Alabama’s fading landscapes, the Pike County Chamber of Commerce Farm City Committee was focusing on the fading scenes in rural Pike County, specifically those within the farming community.

Pike County’s agricultural history is in row crops including cotton, corn, peanuts and soybeans. The county can boast of good hay fields that also provide fodder for the farm animals. In the early days, mules were most important to the small farms. It was often said that a mule was so important to the farm and the farm family that a man would feed the mule before he fed his wife. Hogs provided meat for farm families and chickens for the Sunday dinner tables. Cows provided the milk and eggs for the breakfast table.

The farm animals were vitally important to the farm families, that not only fed their own, but also provided food for the townspeople, who, in turn, provided farm and household supplies for the community population.

Understanding the vital role that the farming community played in the growth and prosperity of Pike County, the Chamber of Commerce Farm City Committee realized, as did Willis and Braden, that the farming scene, as it was before the invention of the “mechanical monster,” or tractor, was fading from the rural landscape.

And, no more visible acknowledgment of the fading rural scene, is the barn.

Barns were used in many ways. They were used to house the animals, to store hay, corn and other seed crops and to provide protection for tools and equipment from the elements the barn loft provided a play place for the kids and the tin roof was a place for the lady of the house to dry fruits for the cold winter ahead.

“Members of the Farm City Committee realized that the number of these old barns was dwindling,” Huggins-Davis said.

Many of the aging barns were not well constructed. Trees from the farm were often used in the building of barns and the wood was not treated so the weather and boring insects caused the structures to weaken.

“As farming and farm life changed, the barns were not being used as often and, therefore, not as well maintained,” Huggins-Davis said. “Maintenance was expensive and not a priority on a changing farm, so time and the elements began to take a toll on the barns.”

Many stood as lonely sentinels of time, some kneeled, some fell and others were re-purposed as wallboard, shelving or picture frames.

Some of the barns in and around Pike County have been semi-restored for storage or sheds for farm equipment or renovated as gathering places or man caves.

Others, however, have stood the test of time and remain a part of Pike County’s rural landscape. The Farm City Committee realized that, perhaps, some of the barns will be reused and preserved for future generations. Others, not. However, all of the barns, no matter the condition, free standing or in a degree of collapse, can be preserved for future generations through photographs.

The Farm City Committee invited and encouraged barn owners to submit photographs of their barns to be archived so that generations to come many know and appreciate the role barns played in the development and progress of Pike County. Many owners did and their support was, and is, greatly appreciated, said Huggins-Davis, who took the time and made the effort to travel through-out the county looking for barns to photograph.

Photographing barns was a learning and treasured experience.

“Getting permission to photograph the barns provided opportunities to meet the owners, and often their families, and to hear their stories of the barns,” Huggins-Davis said. “Those stories were a lesson in history and gave me an even greater appreciation of the role barns played in the growth and prosperity of Pike County.”

The photographs, 30 of them, were displayed at the 2021 Farm City Banquet and, the hope of Huggins-Davis is that those photographs and others will be preserved in a book, perhaps, titled