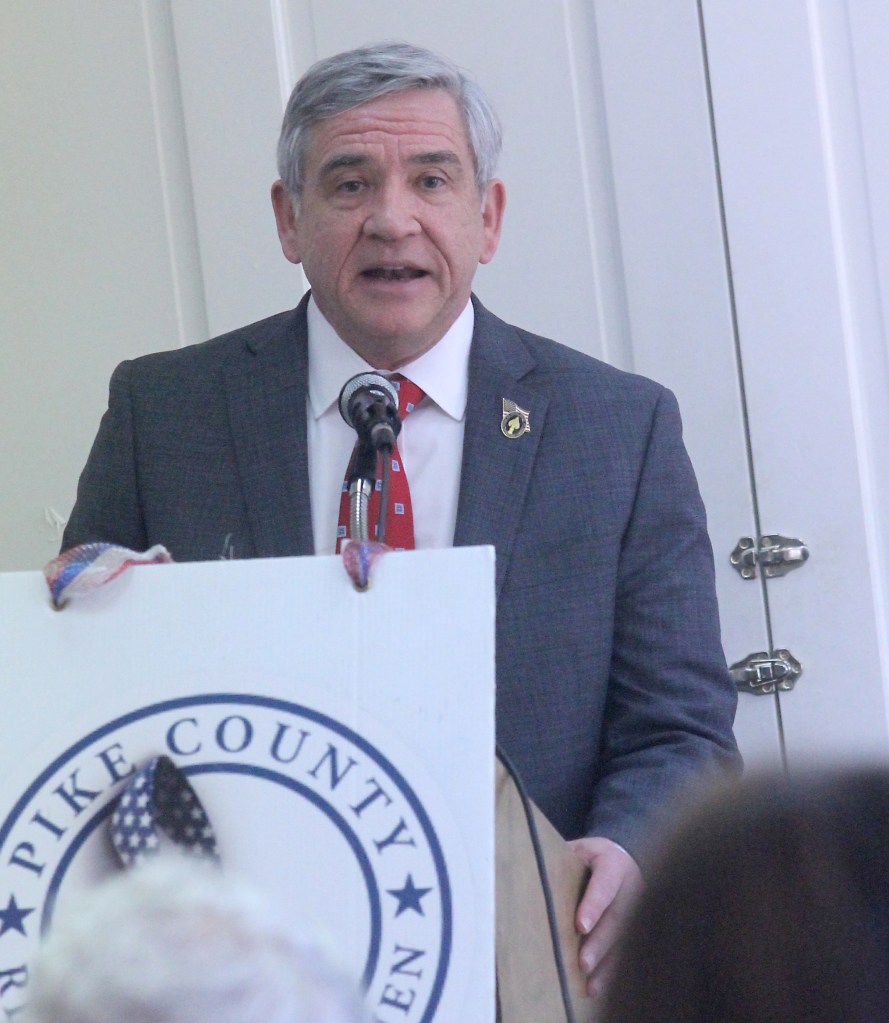 Huck Treadwell | The Messenger Mike Durant, a candidate for the U.S. Senate, spoke to the Pike County Republican Womens Club on Wednesday.

Durant retired from the United States Army in 2001 and founded Pinnacle Solutions, a Huntsville company that provides training, products and support services to aerospace and defense customers. Durant was assigned to the 470th Military Intelligence Group and later attended flight school at Ft. Rucker. He flew more than 150 medevac missions as part of the 377th Medical Evacuation Company in Seoul, South Korea, before joining the 101st Aviation Battalion and then the 160th Special Operations Aviation Regiment.

During Operation Gothic Serpent in Somalia in 1993, Durant’s Blackhawk was shot down and he suffered crushed vertebrae and a broken femur. Durant’s crew – Bill Cleveland, Ray Frank and Tommy Field – were also badly injured in the crash. Two Delta Force snipers, MSG Gary Gordon and SFC Randy Shugart volunteered for a ground insertion to help protect the crew and fight advancing Somalis. The snipers ran out of ammunition and the crash site was overrun. Durant was the only survivor. He was captured and held hostage for 11 days.

The raid on Mogadishu became the subject of Ridley Scott’s 2001 war film Blackhawk Down.

“Somalia was awful,” Durant said. “I’m proud of what we did. We were vastly outnumbered, but nobody quit. But, as awful as Somalia was, I continued to serve with the 160th until I retired in 2001.”

Durant said he decided to run for the open U.S. Senate seat because he didn’t like the direction the country was headed.

“I never aspired to be a politician,” Durant said. “I don’t like what I’m seeing. That’s why I’m running.”

Durant went on to say he supported securing the nation’s border with Mexico as well as taking a strong look at social programs the government were funding that didn’t work. He said it was also vital that the U.S. continue to have a strong military. He said continuous military funding was critical to the nation’s defensive capability. He also said the U.S. needed to have a stronger international presence.

He pointed to the recent withdrawal from Afghanistan as an example.

“[President Joe] Biden threw away everything we had accomplished since 9-11,” Durant said. “He withdrew from Afghanistan so he could say he ended the longest war in U.S. history before the 20th anniversary of 9-11. It had been a successful military operation. Afghanistan could have been like South Korea. I have no illusions that it would have been as strong as South Korea, but we could have helped Afghanistan. We’ll see terrorism return unchecked in Afghanistan. We also don’t have a strategic presence in [the region] with China and Iran. We threw it all away. We had terrorists in check in Afghanistan and we threw it all away because stupid, career politicians are running the show.”