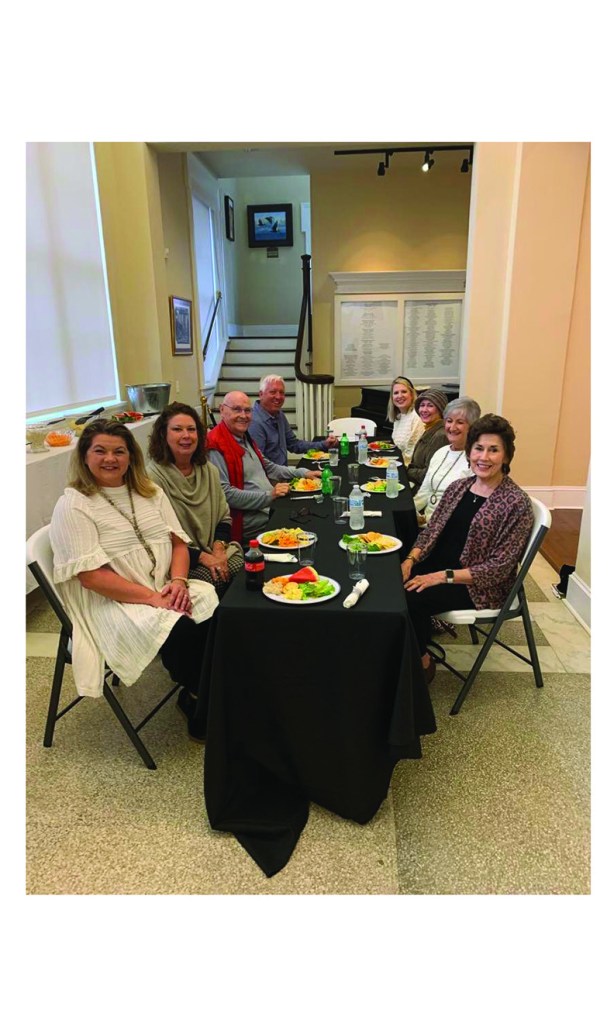 The JCA’s Christmas at the Center Committee met at the arts center Thursday for lunch and to evaluate the annual holiday event held on December 2.

And, it was summed up with only one word, “fun!”

“‘Christmas at the Center this year was fun; it was blast!” said Mac Gibson, committee member. “Our band, the Blues Factor from Tallahassee, was fabulous. I was on the floor dancing all night.”

No, not break -dancing, Gibson said with a laugh, “Just old fashioned dancing.”

Gibson has been involved with the Johnson Center for the Arts since it was in its infant stage.  He has seen it grow to become a premier Alabama arts center.

“After Christmas at the Center this year, I have more reason than ever to be excited about the future of the arts center,” Gibson said. “Most of the time, it’s an older crowd at events like this, but, this year, we had a large young crowd. They had a great time and they stayed until it was over. That was exciting to see. Being around young people and all their energy makes you feel good.”

Gibson said, knowing that young people appreciate the arts and enjoy related events, is validation that the Johnson Center for the Arts will continue to have a place in the community for years to come.”

Gibson said the Christmas at the Center Committee worked hard and worked well together.

“In doing so, our Christmas event came across as very successful and we all had fun,” he said.

“Christmas at the Center is the JCA’s major fundraiser of the year,” said Brenda Campbell, center director. “It was such a success this year that we are booking the same band for next year and will use the same format and look forward to an equally successful Christmas event in 2022.”

Campbell said fundraisers support the JCA’s programming for the year and make it possible to offer free admission to the JCA throughout the year.