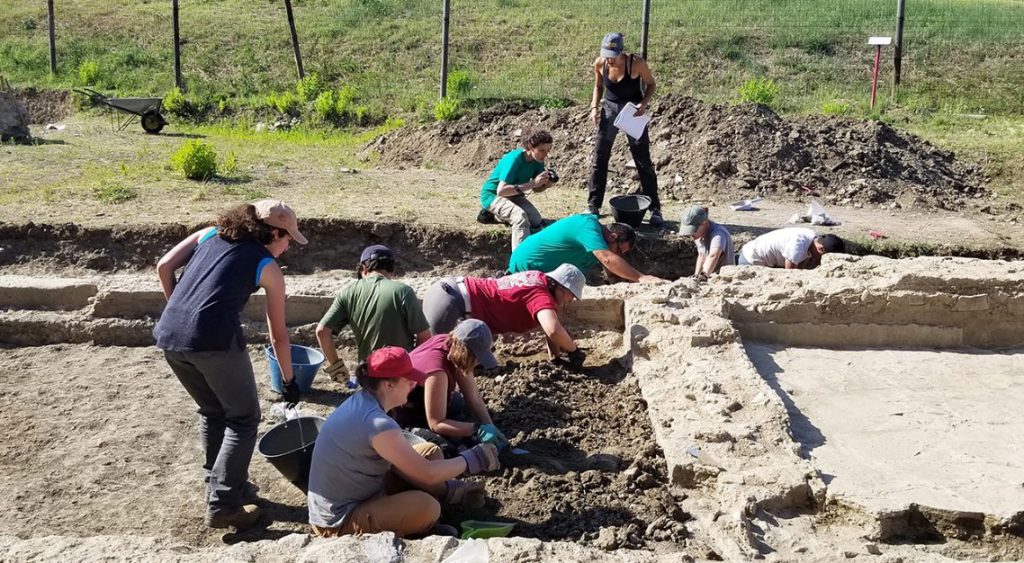 Troy University A partnership with the University of Pisa in Italy allows TROY students to participate in archaeological digs.

After partnering with Italy’s University of Pisa to participate in archaeological digs, Troy anthropology/archaeology professor Dr. Stephen Carmody and his students have helped make several key discoveries in Italian history.

The partnership came about in 2019 after Troy First Lady Janice Hawkins visited Pietrasanta, a town on the coast of northern Tuscany in Italy where TROY students frequently study abroad.

“Mrs. Hawkins was heavily involved in the University’s Pietrasanta visits, and as she was over there that summer, the University of Pisa showed her their archaeology museum,” Carmody said. “She told them we have an archaeology program and that we should work together, and that started the chain of events.”

Having studied in Italy, Carmody was eager to make the connection. Because the Italian archaeologists had no one on staff to study plant remains — his specialized field of study — he was invited straight away.

“They took me to all of their sites and where the students stay in the summer and it was perfect,” Carmody said. “I left thinking it wasn’t going to work, that it can’t be this easy.”

Just a few months later, he and six Troy students made the trek over and participated in a three-week dig in Vada Volterra, a harbor town off the coast of Tuscany that was used for shipping agricultural goods. Volterra is also popularly known as home to the fictional Volturi from Stephanie Meyer’s “Twilight” saga published in the mid-2000s.

“All I remember is standing there, and even while driving up, thinking, ‘This is the top of the world. Where are we going from here?’” he recalled. “Then you walk up these streets and stand on the walls… it is one of the most impressive places I’ve ever been.”

The Italian team’s focus was geared more toward the larger expanse of the landscape while Carmody and the students focused on finding and studying plant remains for the University of Pisa researchers to test later.

After COVID hit in 2020 and international travel opportunities took a hit, he returned on a solo trip to Tuscany this past fall to dig at the Luni site near Carrara, one of the world’s major marble quarries. Located adjacent to the Apuan Alps—a mountain range that appears to be covered in snow but is actually marble—the town fell around 700 AD after green-tinted marble from Turkey became popular, rendering the white stone obsolete.

Having already identified a “huge amphitheater, gigantic temples and mosaic tile floors,” the team began working in an area that had previously been dug up. Initially thought not to reveal anything of significance, they later found a type of floor that was not uncommon for the area but was “very early” for its time.

Carmody and the team discovered a floor of mosaic tile at the Luni site in northern Tuscany.

Carmody and the team discovered a floor of mosaic tile at the Luni site in central Italy.

“You can see some marble and the archeologists were like, ‘Oh there’s nothing there, let’s stop.’ A few days later, to keep the students busy, they go dig this area again,” Carmody said. “As we started to dig, we discovered a giant, mosaic tile floor like the one from before. It’s a room right next to the temple, and that colored floor extended across the whole area. It’s not painted marble, it was actually colored stone that was cut and fit into that huge space. This blew my mind. I work in caves, so I don’t get to see this every day.”

In the time between digs, Carmody is working on a publication with the Italian researchers about how anthropology and archaeology practices differ in different parts of the world.

“They have historical documents, so they don’t have to worry about a lot of the things we do here since Native Americans didn’t develop a writing system prior to Europeans coming,” he said.

Kelsey Mitchell, a TROY grad currently studying for her master’s degree at the University of Tennessee, attended one of the early digs in 2019 and discovered grape seeds, not an unusual find for a country known for its wine production. The importance of the discovery, Carmody said, is that it was the first piece of physical evidence that correlated with historical documentation of this particular region producing wine. Mitchell is now working on her master’s thesis using these samples.

“Historical records say this region produced the best wine in all of Italy, but there was never the evidence to back it up since they don’t look for plant remains,” he said. “They were very excited to be able to connect the historical documents to the archaeological records. Maybe it wasn’t the best wine, but they have proof now that they did actually make wine.”

Participation in the digs is open to all students, not just those studying in fields related to anthropology or archaeology.

“To me, the value of these types of projects is that they’re research-oriented and research-based and we can take any type of student—they don’t have to be archaeology, they don’t have to be anthropology, but they can get involved and help work on international research projects, which I think is pretty neat,” Carmody said. “It’s a really good opportunity for our students, which brings it back to why we do what we do.”