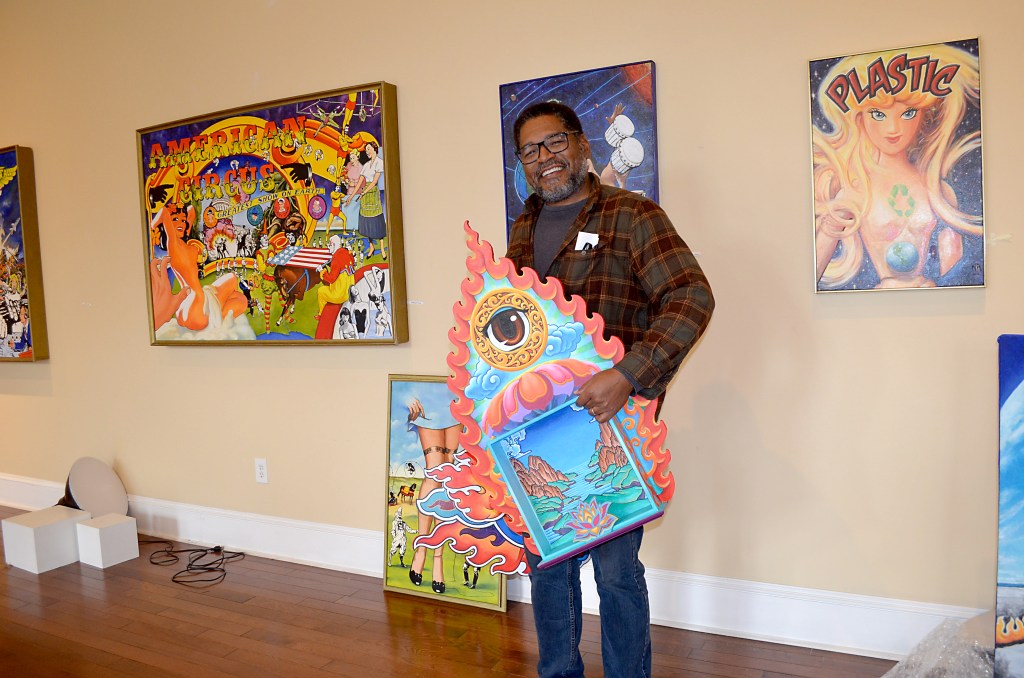 Eclectic: deriving ideas, style, or taste from a broad and diverse range of sources.

That’s the definition of the artwork of Nathaniel Allen, exhibiting artist at the Johnson Center for the Arts.

Allen describes his work as “walking through ideation” and, he might add, with following eyes that possess spiritual clarity.

Or, Allen might describe his work simply as far out and fun.

And, that would be an understatement.

“I like weird things,” Allen said, with a glint of “gotcha” in his eyes and that same glint is evident in all the eyes in Allen’s work. It gets you.

Brenda Campbell, JCA director, agrees that Allen’s work is as captivating as it is fun.

“As we open the 2022 exhibit season at the Johnson Center for the Arts, we are featuring Nathaniel Allen. His exhibit “Insequential Hits” opens on January 5 and will be on display in the Gibson Family Gallery until February 18.

“From talking with Nathaniel, I learned that his love of art started from comic books. As long as he remembers, he loved comic books and even created one as an adult,” Campbell said. “Many of his paintings and murals are in the comic book style. These works are happy and bring a smile to the face of the viewer. On the other hand, his portraits have a depth that captures the spirit of his models whether human or animal. The portrait of Hanna Mae radiates with the love of a father for his daughter.”

Campbell said Nathaniel’s talent and easy-going personality make his artwork even more special. We hope that everyone will come out to meet Nathaniel at his reception on January 13th from 6-7:30 p.m.

Allen has previously worked as a website production assistant, a commercial printer and has owned and operated his own retail store specializing in art supplies comic books, cult movie rentals and toys.

He  has written and performed original music with the band The LG’s. He comes from a talented family which includes most notably his Aunt, Denise LaSalle and Uncle, James “Son” Thomas, one of the last of the Mississippi Delta blues men.

Both his parents were educators in their profession and musicians as their passion.