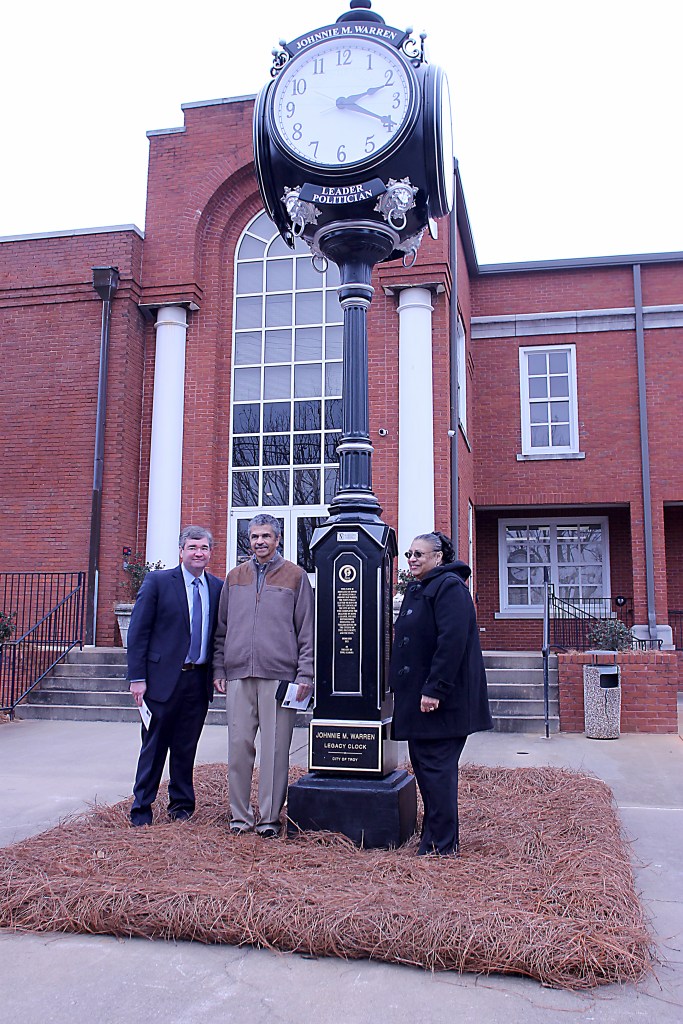 Huck Treadwell | The Messenger A clock was dedicated in the memory of late Troy Councilmember Johnnie Mae Warren. Pictured are (from left) Troy Mayor Jason Reeves and Warren’s children, Dr. Eddie B. Warren and Elaine Warren.

The City of Troy honored Johnnie Mae Warren, the first female elected to public office in Troy, Monday afternoon with a special ceremony to dedicate a clock erected in her honor.

In 1985, Troy changed from a commission form of government to a mayor-council form of government. Warren was one of the five original councilmembers elected in 1985. She was also the first woman elected to public office in Troy.

“It was a hoot to work with Mrs. Johnnie Mae,” Witherington said. “She made things fun and she made things happen. But, she cared about us. She cared about that first group of elected officials. A lot of people thought the world was coming to an end because we had a woman in government. But, the changes she made, made a difference. The progress we have made has been tremendous and Mrs. Johnnie Mae led the way. It was an honor to serve with her.”

On Monday, a large group of current and former elected officials from Troy and the county gathered along with Warren’s friends and family to dedicated the clock in her honor. The clock stands on the walkway to the entrance of city hall on East Academy Street.

Part of the inscription on the clock reads:

“Mrs. Johnnie Mae Warren was an early pioneer in the fight for Civil Rights, Human Rights and Equal Justice. She helped to ensure that all citizens had equal and fair access to voter registration and voting booths. She was a powerhouse in elections, both locally and statewide. With the support of her husband, Deacon Ed Warren, and the coalition she built with Judge Ben Reeves and Rep. Gardner Bassett, together they were able to achieve peaceful social and civil transition during an era of turmoil elsewhere in the country.

“Mrs. Warren always went above and beyond the call of duty. As an advocate for the underprivileged, Mrs. Warren worked to ensure the disadvantaged had food, clothing, shelter, utilities and a voice. She was known to be a champion for equal rights for everyone and diligently facilitated side-by-side community involvement. As a Councilwoman, she was an ardent supporter of city employees and their working environment. One of the reasons Troy’s government is so strong today is because of Councilwoman Johnnie Mae Warren’s leadership, drive and love for everyone.”

“I want to thank you for honoring my mother,” he said. “She loved this city and its people. She tried to do everything possible to help those less fortunate. I’m proud to be her son.”

“Mrs. Johnnie Mae loved people and was someone who got things done for the people.” Reeves said. “The things she did changed Troy. She had strong character, a love for the city and a strong work ethic. Those things are timeless. I hope when people look at this clock, they think of those timeless characteristics she embodied.”